Kerry the Peacemaker Attempting to “Defuse” Tensions between Israel, Palestinians 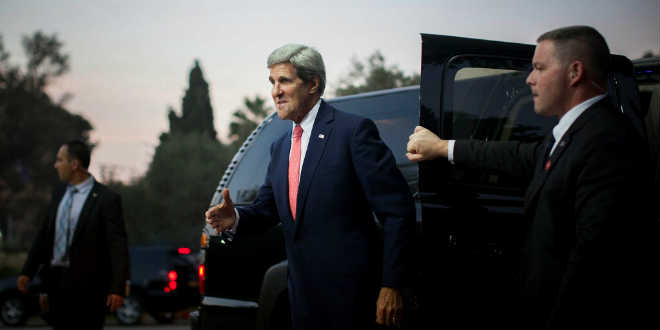 US Secretary of State John Kerry headed to Europe early Sunday in his latest round of shuttle diplomacy aimed at heading off a Palestinian bid for statehood at the UN, AFP reported.

Kerry is expected to first stop in Rome where he will meet with Israeli Prime Minister Benjamin Netanyahu and Russian Foreign Minister Sergei Lavrov.

European diplomats have been making little progress in their recent attempt to revive failed Israeli-Palestinian peace talks. Looking to draft a UN resolution which would force both parties to concede to peace, Europeans are waiting on the US for a response to its last proposal.

Kerry told reporters on Friday that he hopes to stop a showdown between Israel and the Palestinians at the UN.

“There are a lot of different folks pushing in different directions out there, and the question is can we all pull in the same direction,” the secretary told reporters while in Colombia. “What we’re trying to do is figure out what makes sense.”

“We’re trying to figure out a way to help defuse the tensions and reduce the potential for more conflict, and we’re exploring various possibilities to that end, which is why I’m also meeting with Prime Minister Netanyahu.”

Last month, Jordan drafted and circulated a resolution to members of the UN Security Council calling for a November 2016 deadline for Israel’s withdrawal from parts of Jerusalem, Judea and Samaria.

The US, which has veto power, and several other countries opposed the language of the resolution saying it was unbalanced. France, together with Germany and Britain, put together its own resolution in an attempt to garner support for Palestinian statehood from the 15-member council.

Palestinian Authority leaders have expressed their hope that a draft resolution be put to vote by the end of the year. The resolution would call for a return to negotiations and seek a two-state solution.

Chief Palestinian negotiator Saeb Erekat announced Sunday that regardless of diplomatic efforts, the PA will seek international recognition towards statehood at the Security Council on Monday.

Speaking to Radio Palestine, Erekat confirmed that the Palestinian delegation at the UN would submit a proposal seeking a deadline for withdrawal of what he called Israeli occupation of Palestinian territories.

The Palestinian bid at the UN comes amid a recent wave of support by European governments recognizing a Palestinian state. Sweden, Britain, Spain, Portugal, Ireland and France are the latest countries whose lawmakers have passed motions recognizing a state of Palestine.