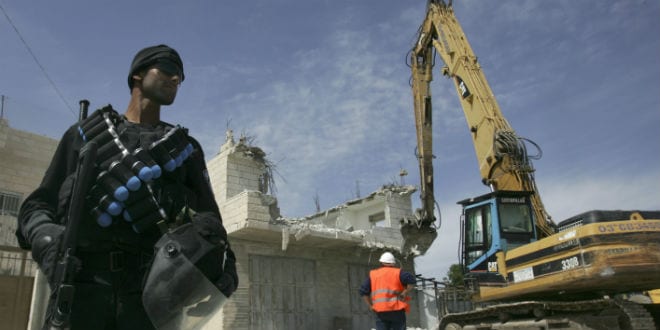 A study initiated in 2008, whose final conclusions will be published next month in the Journal of Politics, offers definitive evidence that Israel’s policy of terrorist home demolitions in fact helps deter future terror attacks. This is in sharp contrast to widely publicized beliefs which claim no less than an Israeli military study concluded the opposite before putting the country’s home demolition policy on hold in 2005.

The study was conducted by Efraim Benmelech, a professor at Northwestern’s Kellogg School of Management, and Hebrew University economists Claude Berrebi and Esteban Klor, and reported on by Yishai Schwartz of The New Republic magazine.

The trio collected data on home demolitions and terror attacks from the period of the Second Intifada (2000-2005). Receiving “zero help from any government agency”, according to Benmelech, they had to rely on reports from Palestinian sources, human rights group B’tzelem, and publicly available Israeli security information.

The logic behind the policy is to give potential suicide bombers reason for pause before carrying out their plans. It follows that a terrorist planning a suicide mission does not fear bodily harm or death, so something else must be added to the stake to deter them. That something is potential harm to their families.

It is also hoped – and indeed, has been known to play out – that those same families would be incentivized to turn in their potential terrorist relatives to protect themselves and their homes. Finally, demolitions are meant to undermine the culture of celebrating terror by bringing it home to the community.

The policy has its origins in the British Mandate era, when the British response to growing unrest between the local Arab and Jewish populations was to authorize the destruction of “any house, structure or land… the inhabitants of which [the local military commander] is satisfied have committed… any offence against these Regulations involving violence.”

Although applied sporadically in the intervening years, it was used often during the Second Intifada, with 538 Palestinian homes demolished.

Home demolitions were always controversial, however, and in 2004, then military Chief of Staff Moshe Ya’alon appointed a committee to reconsider the policy. In 2005, Defense Minister at the time Shaul Mofaz abruptly ended the policy in light of the recommendations of the committee. This recommendation took on the authority of a “military study” in the media, and the Mofaz’s decision “proved” the committee found the demolitions ineffectual.

Schwartz tracked down the general who headed the committee, Udi Shani, who told him no serious examination of the correlation between demolitions and terrorism rates took place at the time. In fact, he told Schwartz, “most of the professional side” supported continuing the policy. Nevertheless, outside considerations led Mofaz to his decision.

The new study, which is perhaps the first real study in any event, points strongly in one direction. As the authors wrote, “The results support the view that selective violence is an effective tool to combat terrorist groups and that indiscriminate violence backfires.”