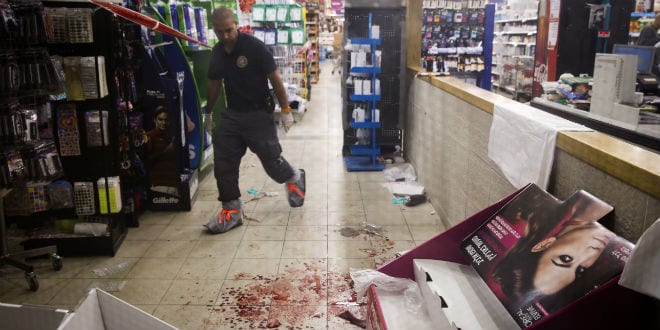 Everyone knew that Dec. 4 wasn’t the usual Thursday night at the Rami Levy supermarket. The customers knew and the workers knew. There were still people pushing their carts through the parking lot with groceries in the distinctive pink Rami Levy bags, but everyone could see the place was uncommonly low on shoppers stocking up for Shabbat.

In fact, there was room aplenty to maneuver a shopping cart through the grapefruit and pepper aisles of the supermarket in the Mishor Adumim Industrial Park, the branch where an Arab teenager from Jerusalem had stabbed two men the day before. The lines for the butcher counter and the checkout line were short.

In the wine aisle, Edda Weisberg of Ma’aleh Adumim was shopping with her daughter, who is “a little nervous,” Weisberg said, “but I told her we have to keep going.”

This push to “keep going” echoed among all the shoppers who spoke to JNS.org on the night of Dec. 4 at the supermarket close to the bustling metropolis of Ma’aleh Adumim, which is home to about 45,000 Israelis. There’s a modern mall and a new music conservatory, and the town is accessible by just a 25-minute bus ride from downtown Jerusalem.

“We’re not afraid at all,” said Chen Gavra-Refaeli of the Pisgat Zeev neighborhood of Jerusalem, who was selecting lemons in the produce section. “We believe that our enemies want us to stay away, that they want to shut us down, and we can’t let them,” she said.

In fact, some shoppers actually expressed a greater sense of security than before.

“After yesterday we are just a little more careful than we would have been, more alert to our surroundings,” Rivkah Lambert Adler of Ma’aleh Adumim said as she loaded her groceries on the conveyor belt, “but it also never occurred to us not to come.”

The 16-year-old Palestinian terrorist had walked by the security guard in the supermarket branch a little after 4 p.m. on Dec. 3 and made his way to the back of the store, where he then proceeded to stab two men. This is a scene thousands have since viewed on video thanks to a wall-mounted camera in the store. Both victims have been hospitalized.

One of the victims, a paramedic, called for help while bleeding from his hand and head. The attacker, who had been shot in the leg by an off-duty security guard from the Prime Minister’s Office and had been held down by customers until the police arrived, was also hospitalized.

When Israeli Prime Minister Benjamin Netanyahu got the news of the attack, he called to thank the guard.

“I told him that even when he isn’t at work—he’s at work,” Netanyahu said, the Jerusalem Post reported. “And this is our work—to fight terrorism with the same determination, persistence, and decisiveness.”

The Rami Levy supermarket chain, which is the third-largest grocery chain in Israel and a pioneer of discounted shopping, has long been held up as a model of cooperation between Jews and Muslims. The chain has a long history of welcoming Arabs from surrounding towns as both customers and employees.

“Not only are we looking over our shoulders a little but you can see it on the (Arab) workers’ faces,” Yoni Bahat of nearby Kfar Adumim told JNS.org. “Maybe they feel a little ashamed, I don’t know, but they’ve got to be afraid for their jobs,” he said.

When the owner of the chain, Rami Levy himself, arrived on the scene of the terror attack, he told employees and reporters alike that the terrorists had attempted to destroy a place of coexistence between the two peoples.

Jacob Richman of Ma’aleh Adumim, a regular shopper at the branch for many years, said, “Even though everyone knows that our army and our police are doing the best they can, security is the number one issue here, and the people are looking for a government that will be able to protect them.”

While stocking up on bags of salty treats for his four daughters, Yaron Cohen-Arazi of Kfar Adumim said that if Israeli citizens don’t continue living their lives normally, they will “risk losing everything.”

“Even if we didn’t need anything, I would have come tonight. If we stay home, they win and we lose,” he said.