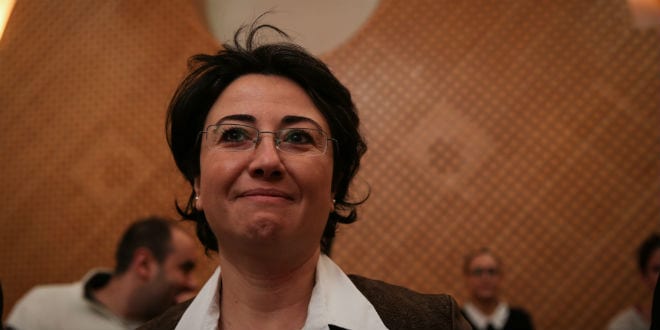 Arab MK Hanin Zoabi’s appeal to Israel’s High Court to overturn the six-month suspension imposed upon her by the Knesset Ethics Committee in July was rejected Wednesday. Additionally, the previous evening, Israel’s Channel 10 reported that State Attorney Shai Nitzan supported indicting her for incitement against police.

Zoabi has a long track record of inciteful comments against the country and the government of which she is a part. In July, during the search for the three kidnapped Israeli teens, Zoabi expressed sympathy for their kidnappers in an interview with Israel Army Radio, saying they were not terrorists, but “people who see no other way to change their reality.” She even questioned whether the kidnappings even happened.

Not satisfied with calling the actions of the very government of which she herself was a participant into question, Zoabi called for a “siege” to be laid against Israel. She also published an article on Hamas’s official website during Operation Protective Edge, in which she encouraged the Islamist terror group’s supporters to rise up against Israel. This prompted the police investigation which led to Nitzan’s recommendation.

In banning the MK from Knesset in July, the Ethics Committee differentiated between legitimate criticism and encouragement on Israel’s enemies. Although Attorney General Yehuda Weinstein at the time determined her words did not meet the legal definition, Knesset Speaker Yuli Edelstein said they were “bordering on incitement”.

The ban means Zoabi may vote, but may not take part in other forms of parliamentary process, such as making speeches, submitting questions or initiating debates.

Zoabi appealed the decision to the High Court on October 7, and the hearing was held Tuesday. The final decision was handed down Wednesday, in which four of the five judges in the case agreed that “there is no room for involvement in the decision of the (Knesset) Ethics Committee, according to which the petitioner violated Rule 1A of the ethical guidelines for Members of Knesset,” reported Israel National News.

The judges lashed out at Zoabi for her stance.

“There is no precedent in the entire world of such statements by a parliament member who expresses such sentiments about the state in which he in an MP,” said Judge Hanan Meltzer.

“I personally don’t understand how a person who declares that she believes in non-violence can say that those who kidnap children are not terrorists,” said Judge Esther Hayut.

Zoabi brought her petition with support from Adalah Legal Center for Arab Minority Rights and the Association for Civil Rights in Israel. They argued the Ethics Committee had exceeded its authority, undermining Zoabi’s freedom of political expression, and that the punishment was disproportionate and discriminatory.

Zoabi’s lawyer sought to mitigate her words by saying she had called for a diplomatic, not a military siege, reported Haaretz. He alleged that her intention was to help end the occupation. Judge Elyakim Rubinstein rejected this position, saying, “How will the occupation end without negotiations?” The justices also noted that this defense was being raised for the first time in the High Court, and not to the Ethics Committee itself or the full Knesset, to which Zoabi also appealed.

Knesset legal adviser Eyal Yinon, who represented the Knesset at the appeal, pointed out that in practice, the six-month suspension, which ends January 29, only lasted a month and a half. For three months of the period in question, Knesset was on vacation, and earlier this week, the 19th Knesset was dissolved. New elections will be held in the spring.