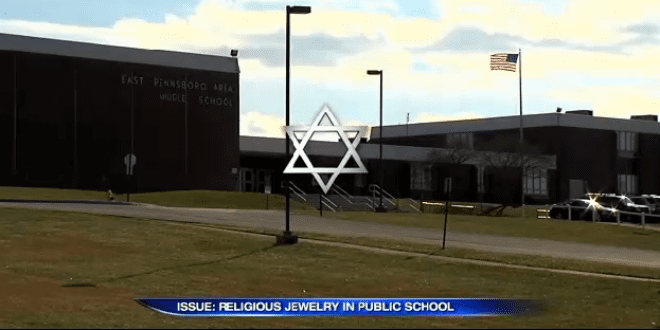 A Pennsylvania parent filed a formal complaint last month with his local school district over the Star of David necklace worn by his son’s teacher.

According to a 1949 Pennsylvania State law, “no teacher in any public school shall wear in said school or while engaged in the performance of his duty as such teacher any dress, mark, emblem or insignia indicating the fact that such teacher is a member or adherent of any religious order, sect or denomination.” Violation may be punished by up to a year’s suspension, extending so far as to make the teacher ineligible to teach in the same institution if the violation continues.

The complainant is one Ernest Perce, a former atheist activist who now considers himself Orthodox Christian. His son is one of two children in the middle school teacher’s class who complained about the teacher’s jewelry.

Students “are there to learn about education, not to learn about religious points of view,” Perce told ABC 27 in November. “If a child is subjected to a teacher where a symbol of Judaism is allowed to skirt the law, I believe that a Muslim should be allowed to cover her head as well as a Christian to cover her head like the Bible commands,” he said.

Perce is no stranger to religious controversy. In 2012, while still atheist, he protested against the state declaring that year “The Year of the Bible”, and that Halloween he created a stir by dressing up as “zombie Mohammed”. He was assaulted by a Muslim for the offence, reported JTA, but the presiding judge in the case against the attacker actually rebuked Perce for his incitement.

Although the district’s lawyer would not comment to ABC, Perce received a letter saying the board would not require the teacher to remove the necklace. Perce has threatened to advance legal action against the school and the district, which could result in fines for the board and suspension for the teacher.

In the meantime, ABC reported, Perce’s son has been moved to a different class, which is a shame, because he actually liked the teacher in question.