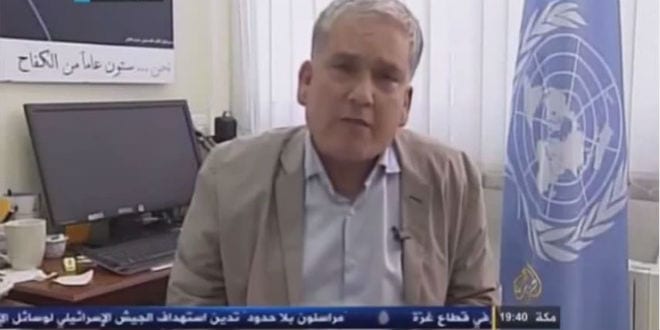 Gunness made waves this past summer for siding with Hamas during Operation Protective Edge. UNRWA, as well, stands accused of supporting the organization, designated terrorists by most Western countries, returning rockets found in its schools to Hamas, and hiring teachers affiliated with the terror group.

Gunness’s comments were spawned by an op-ed published in The Jerusalem Post, in which Palestinian Human Rights activist Bassam Eid, who himself grew up in an UNRWA-administered refugee camp, called for a reform of the agency’s mandate.  According to Eid, UNRWA does not want to help Palestinians improve their lot in life. “The more Palestinians suffer, the more power goes to UNRWA, which allows it to raise unchecked humanitarian funds and purchase munitions,” he wrote.

To offer real relief to the refugees it purports to help, he continued, “proud Palestinians” must “influence donor nations to reform UNRWA and predicate future aid to UNRWA on reasonable conditions,” including transparency and curriculum reform.

According to Hillel Neuer, executive director of the Geneva-based UN Watch, “UNRWA’s call to boycott an Israeli newspaper is a markedly political act that is inconsistent with the neutrality requirements applicable to all humanitarian agencies, and specifically negates provisions of UNRWA’s just-signed agreement with the U.S. State Department.” It is one thing to criticize a newspaper, but calling for boycott is another matter entirely.

“UNRWA’s boycott call also stands in stark contrast to its utter silence in the face of genocidal anti-Semitism published by Hamas and PA media, not to mention its inaction in regard to the anti-Jewish online postings of its own staff.”

The 2015 UNRWA-U.S. Framework for Cooperation, signed November 17, obliges the agency to “ensure adherence to principles of neutrality,” and specifically “the neutrality of UNRWA’s staff.” It also requires the “prompt initiation of investigations upon receipt of credible information about alleged staff/personnel misconduct.”

UN Watch has called upon both Secretary-General Ban Ki-moon and U.S. Ambassador Samantha Power to investigate these violations.