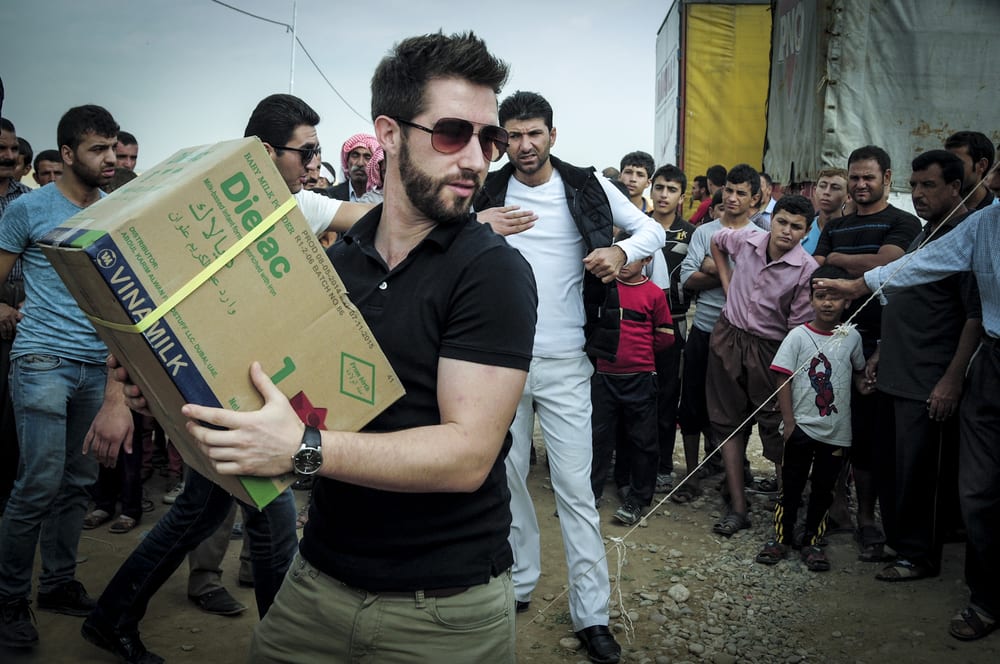 Known primarily for their military prowess and high-tech ingenuity, Israelis are often overlooked when it comes to their global engagement. But IsraAID, an Israeli non-profit and non-governmental organization founded in 2001, has been on the frontline of every major humanitarian crisis of the 21st century—including today’s most difficult hotspots in Iraq and West Africa.

“Our mission is to efficiently support and meet the changing needs of populations as they strive to move from crisis to reconstruction and rehabilitation, and eventually, to sustainable living,” Navonel Glick, IsraAID’s program director, told JNS.org.

Drawing on Israel’s military expertise and robust healthcare system, IsraAID has tackled humanitarian disasters in 22 countries, including the earthquakes in Japan and Haiti, refugee situations in South Sudan and Kenya, and Hurricane Katrina and Superstorm Sandy in the United States.

In early October, IsraAID supplied mattresses, blankets, food, and hygiene kits to more than 1,000 people in the Dohuk and Erbil refugee camps in Iraq’s Kurdish region.

Providing aid to refugees in the Arab world is no easy task for an Israeli organization, especially in countries as hostile to the Jewish state as Iraq, which has been overrun by jihadists from the Islamic State terror group.

“This is an issue that is very sensitive, but not for the reasons that one would expect,” Glick said. “More than our security, our concern is how to make sure to protect the people that we are helping. Having people we want to assist become the target of Islamic State sleeper cells within camps would be horrendous.”

The plight of Iraq’s Christians and Yazidis is eerily similar to the story of the country’s former Jewish community. The modern persecution and expulsion of Iraqi religious minorities draws many parallels to the waves of attacks on, and eventual expulsion of, Iraqi Jewry during the mid-20th century. Nearly 135,000 Jews were forced to leave Iraq from 1948 onwards.

“We decided to launch this project because of the incredible needs of the displaced populations fleeing death and abuse at the hands of the Islamic State,” said Glick. “They are coming with absolutely nothing but the clothes on their backs.”

According to estimates, more than 1.8 million Iraqis have been displaced by Islamic State. Christians in particular have been singled out by the jihadists, with many being forced to convert, leave, or die.

Most of the refugees living in Iraq’s Kurdish region are Christians and Yazidis who fled from Islamic State during the summer. A video recently posted by IsraAID shows the organization’s truck arriving at a refugee camp in Kurdistan, with relief workers being warmly greeted by the refugees as they distribute the humanitarian items.

While Israel does not have diplomatic relations with Iraq, Israel and the Kurds maintain warm relations, and Israeli Prime Minister Benjamin Netanyahu has backed Kurdish independence.

“We do not want to hide our identity, and to be honest, with those who knew where we were from, we never encountered any animosity whatsoever—quite the opposite at times, in fact,” Glick said.

IsraAID is funded by a diverse group of sources—including North American Jewish communities, Christian partners, foundations, corporate sponsors, and private individuals. The American Jewish Committee (AJC) recently announced that it would provide assistance to IsraAID’s efforts in Iraq and West Africa. AJC has partnered with IsraAID in the past on a number of humanitarian relief missions.

“AJC has long responded to humanitarian crises around the world,” Kenneth Bandler, AJC’s director of media relations, told JNS.org. “Our partnership with IsraAID began about a decade ago to offer an international Jewish response to manmade and natural disaster and emergency situation.”

“IsraAID’s ability to send quickly much-needed humanitarian and medical experts and supplies and to be among the very first on the ground is impressive, and, importantly, demonstrates that Israelis can and do assist others,” added Bandler.

Currently, IsraAID is the only Israeli entity present on the ground in West Africa amid the Ebola crisis. Glick, who currently is in Sierra Leone to help lead the organizations efforts there, described the situation was “very worrying.”

The Israeli Foreign Ministry and MASHAV – Israel’s Agency for International Development Cooperation have jointly begun sending aid to the region, including the deployment of mobile field hospitals that feature isolation units and protective gear for medical professionals.

Despite increasing international assistance, more than 4,000 people have died so far in the Ebola outbreak.

“The Ebola outbreak continues to spread, and while an increasing amount of international support is coming, the healthcare workers that have been on the frontline of the fight for over five months now are absolutely exhausted, burnt out, and traumatized,” Glick said.

In Sierra Leone, IsraAID is beginning to provide training to address the psycho-social impact of Ebola.

“Most people realize the very direct medical efforts necessary to tackle the disease, but only now are people starting to realize the psychological toll that the outbreak has had on huge sections of the population—from fear of infection, to grief for whole families and communities that have been decimated, all compounded by increasing stigma towards survivors and the families of victims,” Glick said.

According to Glick, the reaction to IsraAID training has been very positive among the people of Sierra Leone and the country’s government—including support from the First Lady of Sierra Leone, Sia Koroma, who is a trained psychiatric nurse.

Though the crisis in West Africa is serious, Glick said people around the world need to stop the panic and hysteria surrounding Ebola. He said the sensationalistic global reaction to the outbreak is leading to a growing stigma associated with people from West Africa and hampering efforts to combat the disease.

“This disease is indeed dangerous and scary, but it is not easily transmitted, and even in the affected countries, there are still millions of people that are living their lives every day,” he said.

Glick said IsraAID is committed to continuing to provide aid to Iraqi refugees as winter approaches, and he believes that the Ebola outbreak in West Africa is also a long-term project that may take several years to contain and heal.

“The road to containing and eventually beating this disease is still a ways away, and mitigating its psychological impact will probably take years,” he said.