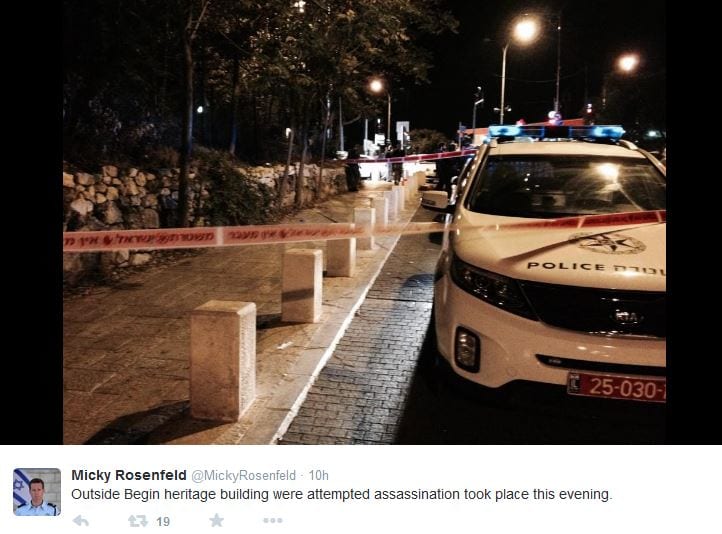 Glick, the head of the Temple Mount Faithful (Haliba) organization, was shot three times. The shooter was wearing a helmet and fled the scene on a motorcycle. It is now known that the shooter is 32-year-old Palestinian Mu’taz Hijazi, an Islamic Jihad activist.

Glick had just finished presenting at the conference, entitled “Israel Returns to the Temple Mount.” Witnesses at the scene said the shooter, who spoke with an Arabic accent, approached Glick and asked him to identify himself. He then shot the rabbi and fled on his motorcycle.

A Magen David Adom paramedic who first responded to the shooting told Tazpit News Agency, “We found a man suffering from a number of gunshot wounds in the upper part of his body.” “His situation at this moment is stable but his life is at risk,” Dr. Yonatan Halevy, director general of Shaare Zedek said. He confirmed that Glick underwent surgery for gunshot wounds in the chest and stomach. Halevy added that Glick had lost a lot of blood and was given several transfusions.

Hijazi, the shooter, was killed early Thursday morning in East Jerusalem following a shootout with police. According to Jerusalem Police, counter-terrorism officers came under fire when they came to arrest Hijazi. They returned fire and Hijazi was subsequently killed.

“Anti-terrorist police units surrounded a house in the Abu Tor neighborhood to arrest a suspect in the attempted assassination of Yehuda Glick, immediately upon arrival they were shot at. They returned fire and shot and killed the suspect,” police spokesman Mickey Rosenfeld said.

The Shin Bet confirmed that the 32-year-old shooter was previously arrested by Israel and had served 11 years in Israeli prison. He was released in 2012.

Islamic Jihad has taken responsibility for the attack. “The assassination attempt on Glick is an act of Palestinian vengeance, in response to what is happening in Jerusalem,” an Islamic Jihad spokesman said on Thursday as reported by Channel 2.

Responding to the shooting, MK Moshe Feiglin (Likud), who was at the conference, said that while the shooting was “terrible,” I was “quite expected.”

“Yehuda Glick was threatened all the time. The fact that permanent security was not assigned to him is a failure,” he said.

Glick has turned to police at least five times to report death threats against his life.

Economy Minister Naftali Bennett called on the prime minister to take a tougher stance on Jerusalem, saying that Netanyahu must return “Israeli sovereignty to Jerusalem.”

“Security is not delivered through actions, not talk. An attack in the heart of Jerusalem is a red-line,” he said. Housing Minister Uri Ariel (Jewish Home) said that the bullets aimed at Glick “were aimed at all Jews who wish to pray on the Temple Mount.”

MK Miri Regev (Likud), who was at the conference on Wednesday night, said that this type of act of terror was only a matter of time.

“The attempted murder of Yehuda Glick is an escalation of events in Jerusalem. As long as the Israeli government fails to act against terror, against incitement and against the Islamic Movement, terrorism will life its head not just in Jerusalem, but across the country,” Regev wrote on Facebook.

On Thursday, Netanyahu wished Glick a full recovery. “I would like to send my best wishes for a full and quick recovery for Yehuda Glick, who is now fighting for his life. I would also like to commend the ISA (Shin Bet) and the Israel Police for quickly solving this act of terrorism.”