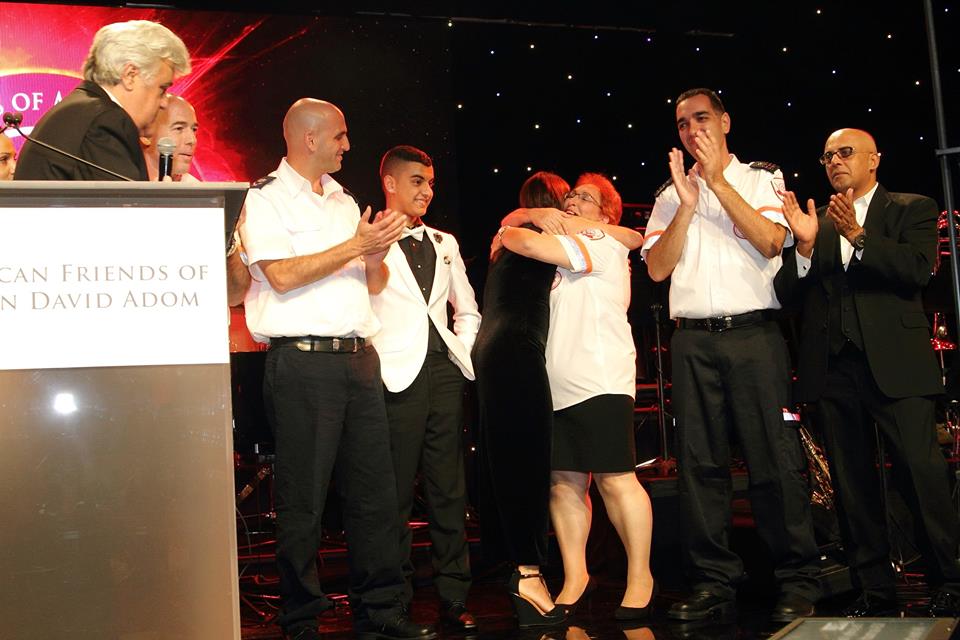 The event raised close to $6 million towards, which qualifies it as the most money ever raised at a single event for AFMDA, Red Carpet Report TV stated. The money will be used to support Israel’s blood bank, as well as purchase mobile intensive care units, emergency response motorcycles and fully equipped ambulances.

Leno kept the momentum of donations going with quick witted jokes. As people simultaneously stood up to make donations, Leno joked, “We want to make sure every Jew in Israel has their own ambulance,” followed by, “Does anyone have land in Israel where we can park all these ambulances?”

The evening got off to a bang as Christian Pastor Robert Stearns sang Hatikvah, Israel’s national anthem, and spoke of his enormous love for Israel.

One of the evening’s highlights was the honoring of MDA first responders from Operation Protective Edge and their reunion with two of the people that they had saved.

16-year-old Yarin Levy was almost killed when a rocket exploded near him in Ashkelon. Jehan Berman was at his son’s third birthday party in Kibbutz Nir Oz when a mortar hit the kindergarten.

The three paramedics who came to their aid, Einav Auslin; Neomi Zvi, Israel’s first full-time MDA female paramedic; and Oren Wacht, then emerged onto the stage to greet Levy and Berman. After the heartfelt reunion, more donations came in as the audience responded to seeing a first hand account of just how important the work of MDA really is.

A large part of the proceeds from the event will be used to build MDA’s new underground national blood center. The new facility will protect a large portion of Israel’s blood supply from terror attacks and natural disasters. MDA provides 97 percent of the blood used by Israel in hospitals and all the blood for the Israel Defense Forces.

According to a report in the Times of Israel, the idea for form an underground blood center took root after the recent 50-day war between Israel and Hamas, following multiple attacks on Tel Aviv, which is where MDA’s blood bank is located.

Israeli Consul General David Siegel said that the importance of donating to MDA helps people all over the world. He informed the crowd of MDA’s recent work helping the victims of the avalanche in Nepal, as well as the less recent but equally important work they did while helping victims of the earthquake in Haiti and following the tsunami in Japan.

“What MDA does is critical for humanity and what you [the friends of MDA] do is critical for the future and you have our deepest thanks from the State and the people of Israel,” said Siegel.

Congressman Brad Sherman (D-CA) spoke about the global threat of terror, and the challenges that Israel faces. “Hamas has only one purpose and that is to kill as many Israelis as possible,” he said.

Sherman joined with US lawmakers in Congress to pass the Emergency Iron Dome Replenishment Act, which aims to provide $225 million to Israel to help restock the Iron Dome batteries as well as an additional $3.1 million for general security needs.

Sherman said this action was necessary “at a time where Israel faces unprecedented threats from Iran, Syria, Hezbollah, Hamas and ISIS.”

Sherman also thanked MDA, noting that while Congress is able to sit safely in Washington, “those who are on the front lines are the real heroes: the paramedics who deal with those injured by the rockets not stopped by Iron Dome. We have a chance here tonight to honor an outstanding organization.”