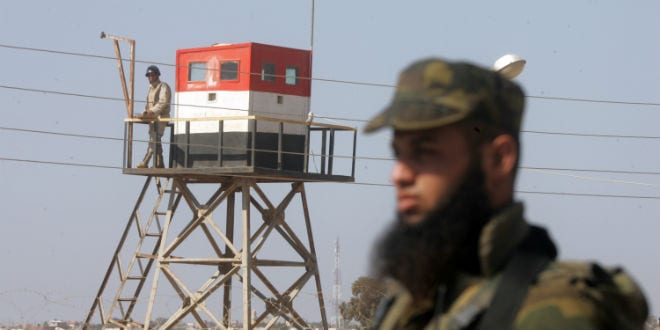 Egyptian officials cancelled indirect peace talks between Israel and Hamas, which were to resume on Monday, after 31 Egyptian soldiers were killed in a terror attack in El-Arish on Friday.

Egypt will establish an expanded buffer zone between the Gaza Strip and the Sinai, security officials in Cairo confirmed.

Egyptian media reported that intelligence officials believe the attacks were carried out by terrorists who entered into Egypt from Gaza through a tunnel.

According to the Egyptian newspaper, Al Yom a-Sab’a, the buffer zone will be established within the next few days. Egyptian security forces are expected to clear the area, which will extend some 1.5 to 3 kilometers, of all structures and vegetation.

Thousands of Bedouins living in the area are to be relocated.

Egyptian forces will also dismantle known underground smuggling tunnels that connects Gaza to Sinai. All buildings that are believed to aid or conceal smuggling will be demolished as well.

The new plan will also see increased Egyptian patrols along the Mediterranean coast, especially around the El-Arish area all the way to the Gaza border town of Rafah. Egyptian officials hope to stem the flow of arms into Egypt and Gaza.

Egyptian President Abd al-Fattah al-Sisi addressed the nation in a televised speech on Saturday following the suicide car bombing. He blamed “foreign hands” for the attack and said that the army would take “many measures” to defend the area.

Sisi declared a three month state of emergency in the Sinai Peninsula. The Rafah border crossing into Gaza, the only crossing in the Hamas-enclave not controlled by Israel, will be closed.

On Sunday, a high-ranking Hamas delegation, who were on their way to conduct indirect talks with Israel, were refused entry into Egypt. Egyptian deputy interior minister Samih Bashadi accused “Palestinian operatives” of involvement in the attack. The talks were cancelled.