Hamas Official: Israel “Hurt the Feelings of the Palestinian People” 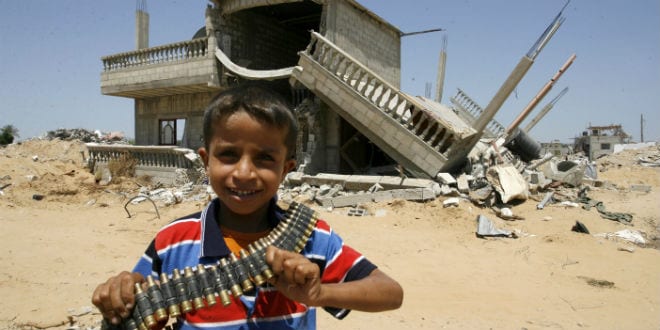 A senior Hamas official threatened violence against Israel on Saturday amidst increasing riots in East Jerusalem over the weekend.

Khalil al-Haya, an official with Hamas’s political bureau, said that Israel will pay a price for any delays in rebuilding Gaza.

Speaking to Hamas-run Al-Aqsa TV, Al-Haya said that Israel’s demands placed on the rebuilding of Gaza “hurt the feelings of the Palestinian people, and they will blow up the region.”

He official warned that people in Gaza have little patience left and if the “occupation” does not meet the agreements it signed in Cairo, a military response will ensue.

Al-Haya stressed that Hamas’s armed wing, the Al-Qassam Brigades, would be able to withstand any Israeli “aggression.”

One of Israel’s main demands towards rehabilitation is the demilitarization and disarmament of the Gaza Strip. Hamas leaders have repeatedly declared that they reject all demands to disarm.

This month, international leaders promised $4 billion worth of funding towards the rebuilding of Gaza after the 50-day war between Israel and Hamas. Israel has already allowed several hundred tons of building supplies into Gaza that are meant to go towards rebuilding efforts.

However, Hamas proudly boasted that its armed wing is already reconstructing terror tunnels damaged by Israel during Operation Protective Edge under the protection of the current humanitarian ceasefire in place. Majority of the supplies being used to rebuild the tunnels are meant to go towards humanitarian efforts in the Strip.

Aside from rebuilding terror tunnels, Israeli security officials believe that the terror group is conducting experimental trials of rocket launches into the Mediterranean Sea.

Since the start of the ceasefire, several Red Alert sirens have sounded in southern communities in Israel. While the IDF has said the alerts are false alarms, it is believed that the alert system is picking up the launches of rockets inside Gaza.

An Israeli security source told Army Radio on Sunday that in the early morning hours, two rockets were launched from what used to be Gush Katif in Gaza. The first landed short and the second fell in the ocean.

The source explained that the experimental rocket launches are “conducted an average of once a week lately.”