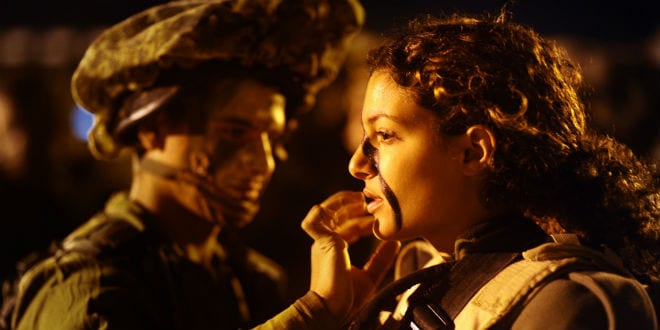 Following the success of its Caracal mixed-gender battalion, the IDF announced it is establishing a second co-ed battalion next summer. The new battalion, to be called “Bardelas”, will consist of 50 percent female soldiers. It is set to begin operating in July 2015.

Caracal has been in service since 2000, following complaints regarding the lack of combat positions for women in the IDF.  The unit is under the control of the Southern Command and works to “secure the Egyptian border from smugglers, infiltrators, and terrorists,” according to the IDF’s website.  The new Bardelas battalion will join the Central Command and protect the region which includes Judea and Samaria.

Critics of the mixed-gender units complain that physical requirements and standards are lowered for women to enable them to qualify for combat positions. According to the IDF, however, both male and female soldiers in Caracal and the upcoming Bardelas units are subject to the same demands.

The IDF explained that of female Caracal conscripts, they “must go through two days of mental examinations and physical challenges before joining, since the course is strenuous and identical to that of any other exclusively male battalion.”

To that end, the IDF also announced in May that it would be opening a special preparatory program for female combat conscripts, to enable them to keep up with their male counterparts.

“Our goal is that when the girls meet the boys in the common basic training course, they will be on their level,’” explained the head of the human resources department for the IDF’s ground forces, Brigadier-General Yigal Slovik, in an interview with the army’s Bamachaneh magazine.

“We don’t want [the women] to begin the army with the feeling that they are less successful than the men. It is obvious to us that two or three weeks of training are not enough, and we are working to extend the length of the preparatory program to a month before the November draft. We are talking about the first time in the IDF that women have undergone physical combat training for the purpose of fighting, with fitness content suited to their needs.”

This summer also marked the first time the IDF opened elite combat positions in its artillery corps to women.

The IDF’s reasons for opening more combat positions for women are more practical than political, says Slovik.  With the shortened mandatory service period for men now in effect, the army is experiencing a 2,300-soldier deficit each year.

“And when there are fewer soldiers, there is a higher dropout rate, because the burden falls on fewer people. The shortening of the service period could be a great opportunity for women, because the commanders have a greater interest in integrating them into the units, not just because of a [social] value.  Women are quality, and their integration will certainly bring the combat system to greater quality,” he said.

Others are not so sure. Critics of the decision to increase the number of co-ed battalions cite the higher rate of injury incurred by women in the IDF, which can cause entire platoons to be disabled. According to Col. (res.) Raz Sagi, who has authored a book on the subject, women’s injuries tend to be more serious, as well, involving stress fractures to the hips and uterine prolapse. These can mean such soldiers would be unable to give birth in the future.

Another concern expressed by military experts is the greater danger women captives face from their captors. One military source told Arutz Sheva that during Operation Protective Edge, strict orders had been issued not to allow women soldiers to go anywhere without male accompaniment.