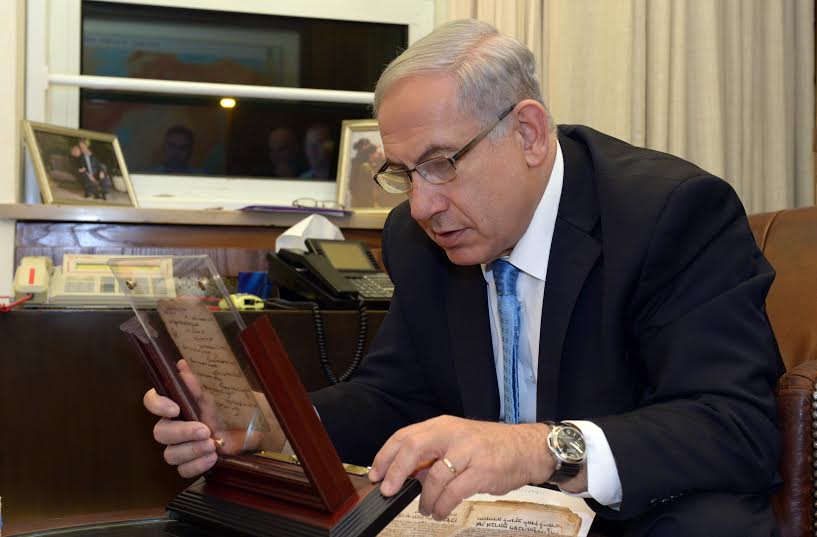 The prayer book, which is around 50 pages long and originates from the Middle East, is written in Hebrew and is still in its original binding. Using sophisticated carbon-test dating methods, it was discovered that the Jewish prayer book dated to the first half of the Ninth Century CE, making it the oldest in existence. The study of the text is ongoing and is only due to end in 2015.

The prayer book contains three main parts: the morning service, liturgical poems and the Haggadah, read during the Passover Seder.

The rare book was first presented to Israeli Prime Minister Benjamin Netanyahu by its owner Steve Green, owner of one of the world’s largest private collections of rare biblical artifacts, known as the Green Collection.

The prime minister was one of only a few people to ever have held and read from the prayer book as well as the first person in Israel. Netanyahu is said to have read from the familiar Hebrew text in great excitement.

In a statement from his office, the prime minister said, “This prayer book is a most important find. It is written in Hebrew and contains the prayers that the people of Israel say to this very day. It is a connection between our past and present and that is something of great value.”

In addition, Green presented Netanyahu with a rare parchment from his collection of religious texts as a gift. The parchment, originally found in the Cairo Geniza from the 12th to 13th Century, contains a dialogue written in Arabic about the relationship between man and his creator.

The prayer book was unveiled in a ceremony attended by Speaker of the Knesset, MK Yuli Edelstein, Speaker of the Knesset, Amanda Weiss, the executive director of the Bible Lands Museum, and Father Gabriel Nadaf, who was presented with an award to honor his work in fostering closer ties between the Jewish and Christian communities in Israel, specifically supporting increased Christian enlistment to the IDF and national service.

“Not only are we the ‘People of the Book’, we are the people of the same book, the same language and the same prayers,” Edelstein said. “These are the exact same words millions of Jews say every morning and this is the best example of Jewish continuity.”

Upon presenting Father Nadaf with the award, Edelstein stated, “Father Nadaf is someone who is faithful to his religion, but also respects other regions. This is what it means to be a real man of faith.”

Nadaf, upon receiving the award, spoke on the great strides Israel has made to welcome Christians into Israeli society, especially with the most recent decision by the Interior Ministry to recognize Aramean national status of Israeli Arabic-speaking Christians.

“We are delighted by the decision to recognize Aramean as a separate national status,” Father Nadaf said.

The prayer book will be on display at the Bible Lands Museum as part of the “Book of Books” exhibit. The exhibition displays some of the oldest biblical texts ever to be seen in Israel. Among the many other documents on display are some of the original fragments from the Septuagint, the earliest New Testament Scriptures, exquisite illuminated manuscripts, rare fragments from the Cairo Geniza and original pages from the Gutenberg Bible. The exhibition is set to close next month after the festival of Succot.

The prayer book was purchased last year for the Oklahoma-based Green Collection. The collection, which has made up a major part of the “Book of Books” exhibition at the Bible Lands Museum, will be permanently housed at the Museum of the Bible which is currently under construction in Washington D.C.

Amanda Weiss, executive director of the Bible Lands Museum said: “We are extremely excited about the arrival of this ancient prayer book at the our Museum. This is a real treasure of the Jewish people, evidence of a thriving and creative community and cultural life 1,200 years ago and we are honored to have it in our ‘Book of Books’ exhibition. We are happy for the opportunity to provide our visitors the privilege to see in person the ancient prayer book during the final month of the exhibition.”