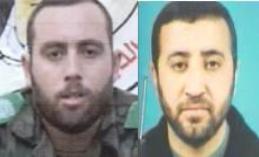 Three senior Hamas officials were killed in Rafah Wednesday night in an IAF airstrike, both Israel and Hamas confirmed.

“The strike was the result of intelligence and operational activities, which led to the detection and attack on two central operatives from the heart of Hamas’s military leadership,” the Shin Bet, Israel’s international security agency, said in a statement Thursday morning.

Two of the terrorists, Muhammad Abu Shamaleh and Raed al-Attar, were commanders in Hamas’s armed military wing. Shamaleh was the Southern Division commander of Hamas and al-Attar headed the Rafah Division.

Both are believed to have played significant roles in the kidnapping and abduction of IDF soldier Gilad Shalit as well as numerous high-profile terror attacks against Israel.

The Izz ad-Din al-Qassam Brigade, Hamas’s military wing, said that the three terrorists were killed in around 2:30 am Thursday during a strike on a home in the Tel al-Sultan refugee camp west of Rafah in the southern Gaza Strip.

The Shin Bet also said that al-Attar was one of the key architects in establishing Hamas’s terror tunnel network in southern Gaza. He was also in charge of the Hamas cell that killed and kidnapped the dead body of IDF Lt. Hadar Goldin.

Hamas spokesman Sami Abu Zuhri warned that Israel would pay a heavy price for the assassinations, calling them “a massive Israeli crime.”

Wednesday night’s successful airstrike is the second high-profile attempt by Israel to neutralize Hamas’s leadership. Overnight Tuesday, the IAF targeted Hamas’s top military commander, Muhammad Deif, in what is believed to be a failed assassination attempt.

Hamas has claimed that Deif is still alive and was not in the building targeted by the strike. However, Israeli intelligence sources told Fox News on Wednesday that Israel has fair evidence that Deif was killed. In the past, Hamas has covered up the deaths of their leaders.