Bringing Light and Joy to Injured Soldiers of the IDF

Home » Bringing Light and Joy to Injured Soldiers of the IDF 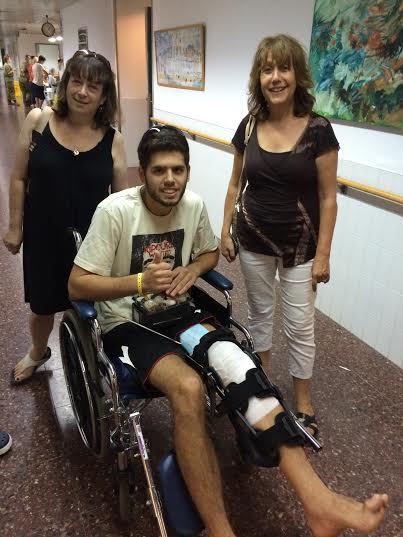 An amazing, ongoing, outpouring of love is taking place in Israeli hospitals all over the country. While Israeli soldiers recuperate and heal from wounds that they received during the fighting in Gaza as part of Operation Protective Edge, thousands of packages and hundreds of well wishers arrive daily at hospitals across Israel to show their support and appreciation for the soldiers.

Aimed at raising the spirits of those injured in battle, well wishers have been flooding hospitals with various forms of appreciation ever since the first injured soldier arrived. LIBI USA, part of the official fund of the IDF, was there in the thick of things this week, handing out letters written by supporters of the IDF from all over the world, from the US to Zimbabwe.

The letters were written in response to a recent letter-writing campaign asking friends and supporters of LIBI to share their feelings and support for soldiers who were injured in the fighting. Each letter was accompanied by a gift-card to an upscale Israeli restaurant chain.

As each letter was handed out, it was hard to miss the smiles that grew on the faces of each and every soldier receiving them.

“We cannot thank you enough,” said the mother of a soldier who was recuperating from a head injury. “It means so much to us to receive letters like this, from the bottom of our hearts thank you,” she said.

The injured soldier also has a younger sister who will soon be enlisting in the army as well. Israel365 Director and LIBI USA emissary Rabbi Tuly Weisz thought it prudent to give her a letter and gift card as well in order to demonstrate that people the world over support her and will continue to support her on her journey while protecting Israel.

“This latest war has really solidified the connection between the IDF soldiers and their supporters and friends from all over the world,” Rabbi Weisz explained to Breaking Israel News. “The IDF is no longer some far away army. People are now personally connected to the IDF and this is what makes all the difference.”

Ayal K., who helped distribute the letters and is a former IDF soldier, reflected on the importance of showing support for the soldiers in an active way.

“While the soldiers were used to gifts and food from anonymous sources, I think that the 129 letters of support that LIBI gathered from around the world (even Tanzania!) genuinely touched the soldiers and their families who were there to receive them,” he said.

One particular volunteer who has been visiting soldiers at the hospitals every day is Simone Farbstein from the Tikvot organization. She explained to Breaking Israel News that the injured soldiers face a long road ahead.

“This journey of recovery for the soldiers is just beginning. Their old life, of combat, of regular everyday life without the memories of the trauma of war, is over. Now this one begins. And after their time in the hospital, after all the gifts and packages and visitors and reporters cease, then the true work begins,” she said.

Tikvot is a volunteer-based organization which rehabilitates Israel’s victims of terror and wounded soldiers through sports and, like LIBI,  has a long term outlook on helping the soldiers maintain hope of a regular life.

“The path starts here, with an outpouring of love,” said another volunteer who was handing out food to the soldiers. “The cocoon of love which has been shown to the soldiers here is simply mind-blowing.”

Mor, a physiotherapist who works one-on-one to help rehabilitate soldiers at the hospital told Breaking Israel News that “the sheer amount of visitors, gifts, organizations helping out the soldiers is on a completely different level than it has been in the past.”

“Everyday groups come, everyday hundreds of packages arrive. It is really special to behold, and it makes my job so much easier. The soldiers are often depressed or angry when they come, and while some of that will stay with them, the letters and gifts certainly help. They let the soldiers know that they are not alone on this journey,” Mor explained.

The staff at the hospital as well as the soldiers posted there had a setback on Tuesday night when, after almost a week of calm, Hamas began firing rockets on Israel, breaking their 11th ceasefire with Israel.

Among the rockets fired were several aimed at Tel Aviv, which caused the Red Alert air raid sirens to go off. The change in the morale of the soldiers was palpable according to many of the military and medical staff who work there.

“The soldiers come here for comfort. They come here to heal. Part of that healing is putting the war behind them. They can’t do that when they come under attack of rocket fire once again. That brings all the memories, all the pain and anguish and trauma of the fighting right back to them,” said a volunteer who has been visiting the soldiers continually since they began arriving. “Today, as a whole, the soldiers are not as high spirited or happy as they were yesterday before the siren.”

Another round of sirens went off on Wednesday afternoon as once again Hamas targeted Tel Aviv and other Israeli cities.

An official from the IDF Unit of LIBI accompanied LIBI USA as they passed out the letters and gift cards to the injured soldiers. The official was awed at the atmosphere in the hospital, which he described as being enveloped in “warmth and love.”

“There were family and friends moving from room to room and the hospital felt more like a house. As we walked into each room, they were filled with pictures, gifts, food and the smile that lit up the soldiers face when they realized they had a visitor is indescribable. You could tell every visitor meant so much to them,” he told Breaking Israel News.

“When we handed out the gift cards with the thank you letters on behalf of LIBI USA supporters from around the world, many of the soldiers began to tear up from the love they were receiving. We listened to the stories of how these brave soldiers risked their lives for our country and we began to understand what it was like for them in Gaza. From one soldier who lost a leg, but still had a smile on his face as he rolled himself out of the hospital after finally being released, to another who told us about how he was in ‘hospital’ in Gaza as a bomb detonated and witnessed  three of his friends die in action, all of them said how much pride they had fighting for the greatest army in the world, God’s army.”

While the soldiers recuperate and gather their strength for the long road ahead, a member of the IDF Spokespersons Unit explained to Breaking Israel News why it is sometimes hard for the injured soldiers to share their experiences fighting for the survival of the Jewish state.

“The media only reports about the anti-Israel rallies that take place all over. About how Israel is demonized by international entities such as the UN and how the international media follows suit. It is why they [the injured soldiers in the hospital] and soldiers in general are so hesitant to talk to reporters,” he said. “This is a place of recuperating, not a place for finding out the latest scoop or the latest story. This is a place to heal, and the soldier’s needs must come first, before any news story, often the media go to crazy lengths to get a story here, it is just inappropriate and inhumane.”

One did not need to fabricate a story, however, to see the gleam on the eyes of the soldiers who are on the receiving end of the outpouring of goodwill from all over the world. Nor did one have to resort to imaginative reporting to see the effect that a letter from an unknown supporter in New Jersey had on a soldier from Nahariya who lost his leg, and the smile that spread over his face as he read the letter.

One only had to watch and see the slow spread of the smile on his face to understand that underneath everything, we are all human.

We all want to feel loved.

We all want to feel supported.

Thanks to supporters of LIBI USA who wrote the letters, these soldiers can begin their long journey of recuperation and healing with the knowledge that they too can count themselves among the lucky who are loved and supported by people all over the world.