US Pressures Israel to Rescind Demand to Demilitarize Gaza

Home » US Pressures Israel to Rescind Demand to Demilitarize Gaza 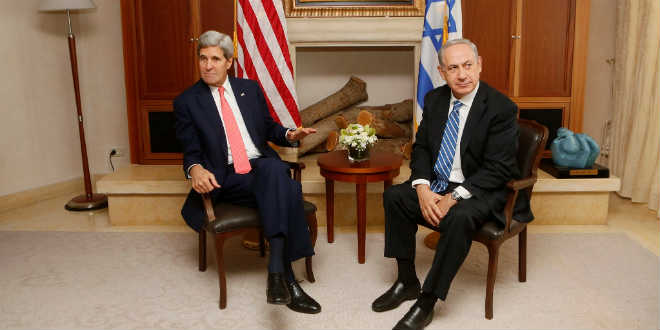 Israel and the United States secretly coordinated on outlining the details of a future long-term peace agreement with Hamas, Ynet reported.

According to diplomatic sources, US Secretary of State John Kerry is supposedly expected to travel to Israel in the next week as a sign of support for Israel and the efforts of Israeli Prime Minister Benjamin Netanyahu.

The main purpose of the secretary’s trip is to show that the relationship between Jerusalem and Washington is not in crisis.

The report indicated that Israel and the US decided that Israel will agree to gradually easing the blockade on Gaza, beginning with land crossings and eventually the maritime border. Israel would not voice opposition to paying the salaries of Hamas civil workers in Gaza and would allow international assistance to rehabilitate the Strip.

At the start of Operation Protective Edge, Israel was adamant that Gaza become a demilitarized zone. According to the report, the US convinced Israel to let go of this particular demand.

Ashraf al-Ajrami, the former Palestinian Authority Minister of Prisoners, confirmed to Army Radio on Tuesday that the Israeli delegation in Cairo has rescinded this stipulation.

“It is estimated that Israel’s demand may not be realized,” he said. “The Israeli side will soon be satisfied with a Hamas that has limited access to arms, and that’s what will end up being the result of the talks in Cairo.”

While the US does not appear to support the demilitarization of Gaza, the US will support Israel’s demand to prevent the rearmament of Hamas and other terror groups operating in Gaza.

The US and Israel have been publicly at odds since the start of Operation Protective Edge. Kerry’s diplomatic efforts to broker a ceasefire between Israel and Hamas was too one-sided in favor towards the terror organization.

More recently, the relationship between the two allies was questioned yet again when US President Barack Obama halted the transfer of weapons to Israel, calling for additional scrutiny on the US’s military relationship with the Jewish State.

On Monday, Israeli and Palestinian negotiators in Cairo agreed to extend a temporary truce by 24 hours as part of efforts to come to a long-term agreement.

Izzet al-Rishak, a Hamas political leader who is part of the Palestinian negotiating team in Cairo, said on Tuesday that Hamas will not agree to any more truce extensions.

“If they fail to formulate an agreement, the negotiations will end,” Rishak said. “We are not interested in lengthening negotiations anymore. A significant part of the delegation did not want to extend the truce, up until the last moments before the truce expired.”