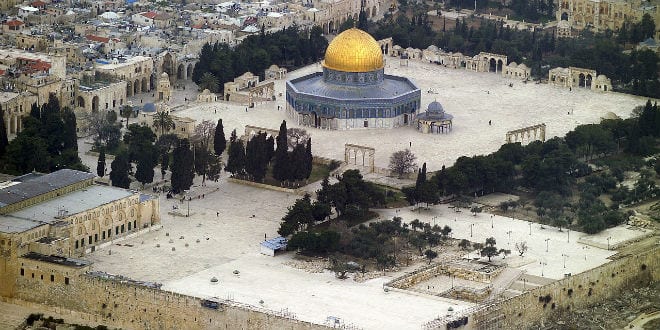 JERUSALEM- Hundreds of Jews ascended the Temple Mount Tuesday morning to mark Tisha B’Av, the Jewish national day of mourning and fasting for the destruction of the two Holy Temples, which both stood on the Temple Mount for nearly a millennium until they were destroyed by the Babylonian and Roman empires.

The Jewish visitors were met by hundreds of Arab protesters that shouted “Allah Akbar” and “Get Out”. This was the first time in three years that Jewish visitors had been permitted to enter the mount on Tisha B’av.

Rabbi Chaim Richman, the international director of the Temple Institute, who led a large group of Jewish visitors, commented that the group went up to the Temple Mount, considered Judaism’s holiest site in a show of unity.

“Today, on Tisha B’Av, the day upon which the Holy Temple was destroyed, we came together with hundreds of Jews to the Temple Mount to fulfill the commandment of being in the holy place, to pray there for the welfare of the IDF soldiers who are defending all of Israel, and to show that the cycle of endless mourning can only end when the Jewish people are ready to accept responsibility for the rebuilding of the Holy Temple,” said Rabbi Richman.

“That responsibility rests squarely upon our shoulders. The sages of Israel have taught that the Holy Temple can only be rebuilt once the nation has achieved a level of unity and unconditional love. Throughout the past few weeks, our nation has been witness to a level of unity that is almost unprecedented in memory. This is the type of unity and commitment that will enable our generation, with the help of God and with the will of the people of Israel, to rebuild the Holy Temple,” Rabbi Richman added.

In the meantime, the Temple Institute’s campaign to raise money for the architectural plans for the Third Temple continues to generate interest with over 250 donations after being launched on Indiegogo a few days ago. According to Rabbi Richman, the campaign, which is supposed to turn the message of Tisha B’Av from one of mourning to building, has raised thousands of dollars from hundreds of people worldwide.

The Temple Institute is an educational, not-for-profit organization whose multi-disciplinary studies and outreach focus on the universal significance of the Holy Temple as a house of peace and prayer for all nations.