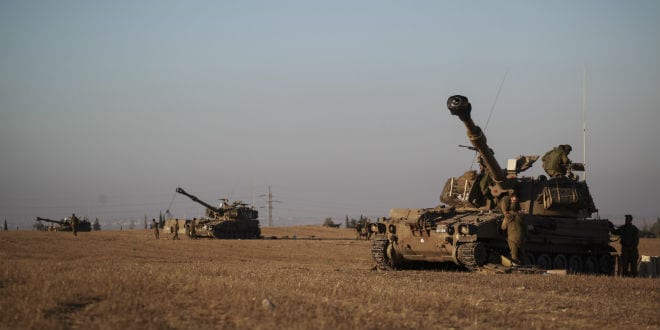 The IDF has confirmed Friday that its first casualty since the start of Operation Protective Edge took place in the early morning hours as troops began a ground offensive in the Gaza Strip.

The IDF soldier, 20-year-old Eitan Barak from Herzliya, was critically injured during intense clashes near Beit Hanoun in northern Gaza at around 3:00 a.m Friday. He was pronounced dead at the Barzilai Hospital in Ashkelon. His family has been notified of his passing.

Four IDF soldiers were also injured in the ground offensive with moderate to light injuries. Many of the injuries suffered thus far by the soldiers in Gaza have been to the face and neck, the IDF stated.

Thousands of IDF reservists have been called up to the Gaza border over the last week in anticipation of a ground attack to destroy the terrorist infrastructure in Gaza. Late Thursday evening, at precisely 10:30 p.m., the IDF entered Gaza in a limited ground offensive aimed at destroying Hamas terror tunnels and end rocket fire into Israel.

Early Thursday morning, 13 Hamas terrorists were ambushed by IDF soldiers attempting to infiltrate Israel via the use of a terror tunnel. Reports indicate that eight of the terrorists were killed. All of the 13 terrorists were found to be carrying a wide variety of weaponry, including machine guns, assault rifles and shoulder-launching RPG missiles. It is believed that the terrorists were on their way to carry out a killing spree in a nearby kibbutz.

The army explained that the goal of the Gaza operation “is to establish a reality in which Israeli residents can live in safety without continued indiscriminate terror, while striking a significant blow to Hamas’ terror infrastructure.”

The decision to enter Gaza via a land, air and sea operation was approved Tuesday evening but not implemented until Thursday. Infantry, engineering, armored, artillery and intelligence troops are working closely with sea and air support in conjunction with the Shin Bet and other security forces.

On Thursday, Israel agreed to a humanitarian ceasefire which allowed a five hour window for Gaza residents to evacuate their homes and collect supplies. Despite the ceasefire, terrorists in the Strip continued to shoot a barrage of rockets upon Israel.

“In light of Hamas’ incessant criminal aggression and dangerous infiltration into Israeli territory, Israel must act to protect its citizens,” a statement from the Prime Minister’s Office said.

“Operation Protective Edge will continue until it has achieved its purpose – restoring quiet to the citizens of Israel for an extended period, with significant damage to the infrastructure of Hamas and other terrorist organizations in the Gaza Strip,” the statement added.

Hamas Chief Khaled Meshaal told AFP Friday from the safety of Qatar that Israel is bound to fail.

“What the occupier Israel failed to achieve through its air and sea raids, it will not be able to achieve with a ground offensive. It is bound to fail,” he stated from Doha.

Meshaal said Hamas has “clear demands” that it will not compromise on, including an end to “the aggression and collective punishment against our people in Gaza and in the West Bank, as well as the lifting of the Gaza siege.”

According to a summary released by the IDF of the first eight hours of the operation in Gaza, the IDF eliminated 15 terrorists and 103 terror targets, including 20 secretly buried rocket launchers.

Since the start of Operation Protective Edge, the IDF has destroyed more than 2,200 terror targets in Gaza. As of Friday, 48,000 reserve soldiers have been called up. An additional 18,000 reservists have been approved for duty by the Israeli cabinet late Thursday night.