Despite Rocket Fire in Israel, New Immigrants Continue to Arrive in Waves

Home » Despite Rocket Fire in Israel, New Immigrants Continue to Arrive in Waves 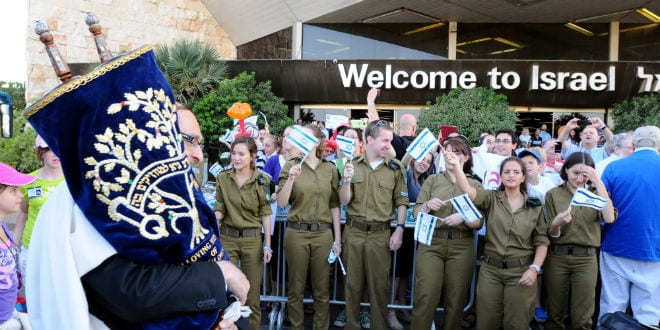 JERUSALEM – Undeterred by the security situation in Israel, hundreds of French Jews are coming home. Some 400 new immigrants from France will arrive in Israel on Wednesday, aboard two special flights organized by The Jewish Agency for Israeland The Ministry of Immigration and Absorption.

Most of the new arrivals are families and more than half are children. The families will be joining communities across Israel with a large percentage moving to Tel Aviv, Netanya and Jerusalem. A significant number will be moving to the southern cities of Ashkelon and Ashdod.

Spokesperson for the Ministry of Immigration and Absorption Oshrat Hazzan told Breaking Israel News that “We are working hard to make sure that all Jews who wish to immigrate to Israel are able to do so, and to make that process as easy and welcoming as possible.”

French Jewry has been known for their staunch support of Israel and the IDF, and has always been a stable voice for Zionism in Europe. “This continuing spirit,” according to Hazan, “is reflected in the fact that in spite of the current military conflict taking place in Israel, not a single oleh cancelled or postponed their flight.”

“The French community has always shown that Israel is their home, and that this is where they want to be. While I am sure that some of them may have doubts regarding the current conflict, they continue to persevere, and have made the decision to make their homes here in Israel in spite of what is going on. This is their home. We are their people. That is the choice that they are making,” she said.

And French Jewry is making that choice loud and clear.

With the continuing rise of anti-Semitism in Europe and France in specific, 2014 has seen a dramatic increase in French immigration to Israel. Sources at the Ministry of Immigration and Absorption and The Jewish Agency, the two organizations tasked with overseeing immigration from Europe, said that they expect more than 5,000 French Jews to immigrate to Israel by the end of the year, vaulting them over the expected number of immigrants from North America.

Already in 2014, immigration is showing a 60 percent increase from last year.

This dramatic increase is due, in part, to a special plan entitled “France First,” developed by the Ministry of Aliyah and Immigrant Absorption and The Jewish Agency to encourage immigration from France and ease French Jews’ integration into Israeli society.

The plan includes efforts to strengthen Jewish identity amongst French Jewish youth, expand Israel experience programs, remove bureaucratic barriers to employment, creating businesses in Israel or bringing them over from France, provide personal attention and help to each immigrant coming, as well as boosting the number of Jewish Agency representatives in France.

While the wave of anti-Semitism is certainly curtailing Jewish life in France, Hazan says that this may not be the only reason as to why the immigrants are choosing to come now.

“The French Jews who are immigrating have been planning to come for some time, so the recent wave of anti-Semitism may have been a slight trigger, but the real reason they are coming is because they truly believe that Israel is their home and it is where they should be,” she explained.

In a speech made to a recent group of arrivals, Minister of Immigration and Absorption Sofa Landver said: “Two weeks ago, when we met in Paris at the moving ceremony during which you parted with the country of your birth, I met entire families whose veins flow with Zionism, who are willing to leave their lives behind in order to realize their dream of immigrating to Israel. Every immigrant who arrives in Israel strengthens us as a people, and this is all the more so when it comes to the growing immigration from France. I congratulate you on taking this meaningful step and promise you that we will be by your side throughout your journey. Welcome home.”

Chairman of The Jewish Agency for Israel, Natan Sharansky, commended those Jews who, despite the rocket fire, are standing strong and joining the ranks of those who can call Israel their home.

“Despite the rocket onslaught against the people of Israel, not one immigrant from France has canceled his or her arrival. More and more people are asking whether Jews have a future in France, but no one doubts that French Jews have a future in Israel. Israel has become a preferred destination for young French Jews and this is due, in part, to The Jewish Agency to strengthen young French Jews’ connections to their Jewish identities and to Israel,” he said.

“By the end of 2014, more than 5,000 Jews are expected to make Aliyah from France. Within a single year, and for the first time in history, a Jewish community in the West is sending a full percent of its Jews to build their lives in the State of Israel. We await you in Israel with open arms.”