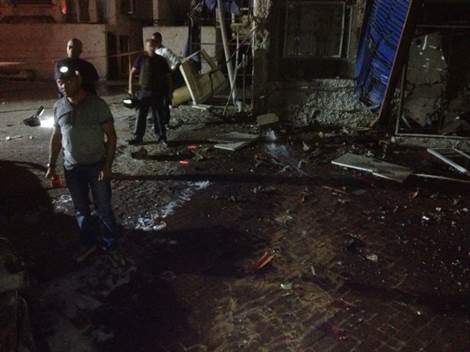 Late Monday evening, a rocket fired by Gaza-based terrorists set off Red Alert sirens in the southern city of Eilat. At around 1:30 a.m., residents of the resort city were warned of an incoming rocket attack.

Two rockets were fired towards the Eilat. One rocket hit a parked car near a hotel while the second rocket exploded in an open area.

Two people were wounded from flying shrapnel and were taken to Yoseftal Hospital for emergency treatment. 11 other people were treated for shock.

Aftermath of Rocket Attack in Eilat

Over the last several months, Eilat has come under rocket fire by Gaza terrorists. However, Monday’s attack is the first on the city since the start of Operation Protective Edge. In January, the Iron Dome Missile Defense system intercepted a rocket shot towards the city.

The attacks on Eilat came hours after a violent day in Israel in which two young girls, sisters from Be’er Sheva, were severely wounded by flying debris caused by rocket fire. An IDF soldier was injured by mortar fragments in the Ehkol Regional Council and an 8-year-old boy suffered injuries from rocket fire.

On Monday, rockets from Syria and Lebanon were fired into Israel. One rocket from Syria, which was fired around 6 p.m., hit a northern town. Early Monday morning, the IDF shot down an unmanned drone that infiltrated Israeli airspace belonging to Hamas.

The attacks on Israel have been continuous despite Israel’s offensive actions to curb Hamas and other terror groups in the Gaza Strip. Despite Operation Protective Edge, which has eliminated over 1,500 terror targets and over 100 terrorists in Gaza, Israel’s Security Cabinet agreed to a one-sided Egyptian brokered cease-fire which began Tuesday at 9 a.m.

Hamas responded to the cabinet’s decision by stating it would never surrender to the Zionist enemy and proceeded to fire rockets upon southern Israel.