Is the Palestinian Authority in Danger of Losing U.S. Funding?

Home » Is the Palestinian Authority in Danger of Losing U.S. Funding? 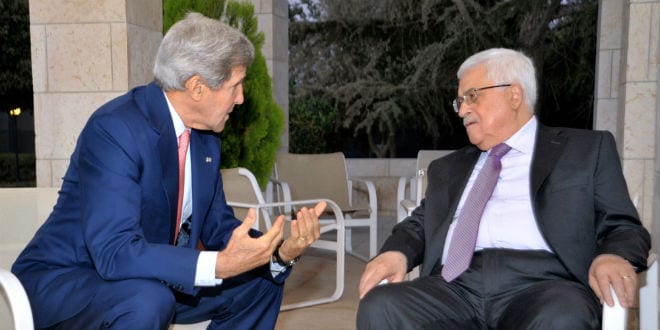 Despite both the Senate and House of Representatives being in recess last week, news of the discovery of the three kidnapped Israeli teens’ bodies was swiftly condemned by U.S. lawmakers, some reinvigorating calls for America to cut funding to the Palestinian Authority (PA) due to Hamas’s involvement in the murders. Hamas, the Gaza-based terrorist group, is part of a unity government with PA President Mahmoud Abbas’s Fatah movement.

The discovery of the bodies of Naftali Frenkel, Gilad Shaar, and Eyal Yifrach devastated Jews across the world hoping for their safe return after they had disappeared while hitchhiking home from school on June 12.

U.S. Rep. Ileana Ros-Lehtinen (R-Fla.), chair of the Middle East and North Africa Subcommittee, and U.S. Rep. Ted Deutch (D-Fla.), the ranking member of that subcommittee, released a joint statement before departing for a planned visit to Israel, where they attended the teens’ funeral and met with their families.

“No words can adequately express the sorrow and sadness we feel for the families of Gilad, Naftali, and Eyal, the people of Israel and the entire Jewish community worldwide. This is a day of tragedy and mourning; the world has lost three beloved sons, friends, and beautiful souls who were taken from us too early, but will forever live on in our hearts and minds,” the statement said. “If it is determined that Hamas is behind this horrific tragedy, Abu Mazen (Abbas) must immediately break up the unity agreement between Fatah and Hamas, a U.S- designated foreign terrorist organization.”

“As a father, I can’t fully convey the sadness I feel in learning of these young boys’ death, nor can I imagine the anguish of their parents,” Schneider wrote, calling the act an outrage and that it “shows the cowardice, brutality and lack of humanity of the perpetrators.”

“Hamas is an internationally recognized terrorist organization and should be treated as such,” he added.

Calls from Capitol Hill for the U.S. State Department to withdraw its support—financial and diplomatic—of the interim Fatah-Hamas government have been heard since it was formed in early June. In a tweet, Israeli Ambassador to the U.S. Ron Dermer described the new Palestinian government as “suits in the front office and terrorists in the back office,” arguing that relations between Washington and the Palestinians should not be “business as usual.” Rather, “a Palestinian technocratic government backed by Hamas should be treated accordingly,” he said.

That new government, made up of ministers without strong visible affiliations with the elected officials in both parties, is tasked with ushering the territories toward new parliamentary elections. The State Department listed Hamas as a foreign terrorist organizations in 1997, but has expressed its willingness to continue working with the P.A., downplaying Hamas’s involvement.

State Department spokeswoman Jen Psaki said that, at this time, it does not appear that the new government ministers are tied to Hamas.

“All U.S. assistance to the Palestinian Authority should have been be suspended years ago, but openly joining a terrorist organization that kills women and children simply because they are Jewish should convince even the Obama administration to wake up and defund this madness,” said Franks. “With the formation by Fatah and Hamas of a unity government, it is all too clear why recent attempts at peace talks have failed. Peace talks will never be productive while only one party is seeking peace and another is openly courting terrorist allies.”

In the Senate, Ted Cruz (R-Texas) and Rand Paul (R-Ky.), two prospective 2016 GOP presidential candidates, have both called for defunding the PA. Cruz is yet to introduce his bill, while Paul’s Stand with Israel Act of 2014 (S. 2265), introduced June 17, is not expected to pass.

Still, in an op-ed for National Review last week, Paul blasted the White House and State Department for what he views as an indecisive, morally equivocating U.S. attitude towards the murder of the Israeli teens.

Since the Foreign Operations Appropriations Act of 2006, Congress has included language in defense appropriations bills making foreign aid to the P.A. contingent on meeting specific demands—including forbidding support and interaction with terrorist organizations such as Hamas and the pursuit of unilateral statehood efforts in the United Nations. Despite violating these conditions, the PA continues to receive financial aid from the U.S., as these provisions include options for the president to apply for presidential waivers, which declare his intention to override the legislation’s language through personal memoranda to Congress.

“Ultimately the president is the one who has to cut the funding, and he’s not shown any sign so far that he will do so,” said Dan Pollak, co-director of government relations for the Zionist Organization of America. “The waivers aren’t necessarily all formal. Some legislation, like the Jerusalem Embassy Act, requires him to put out a formal statement in the waiver, but otherwise he simply proceeds with the act of transferring money to the P.A., for example, and never has to justify how it is a national security concern. It depends on the language of the legislation.”