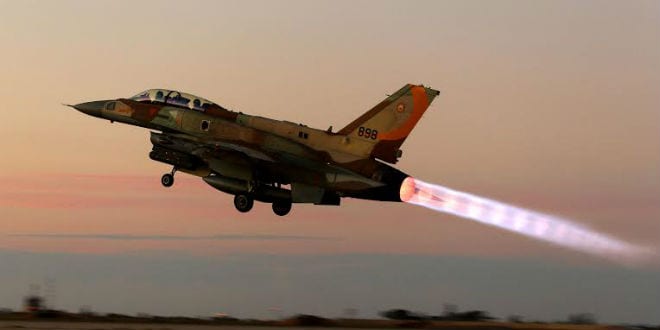 The Israel Air Force successfully carried out a targeted strike in the northern Gaza Strip Wednesday against a Hamas-affiliated Salafist terrorist.

In a statement by the IDF, the airstrike was a targeted hit against a “global Jihad-affiliated terrorist,” carried out with the help of the Shin Bet, Israel’s internal security service.

Palestinian Authority based media confirmed that one person was killed and two others injured as a result of the strike.

The IDF named Mohammad Awwar as the target. A Hamas policeman, the 33-year-old terrorist belonged to an “extremist Salafi” group that is responsible for numerous attacks against Israel and IDF soldiers, IDF spokesman Lt. Col. Peter Lerner confirmed.

“Since January, over 200 rockets were launched from Gaza at Israel, indicating a significant increase compared with the previous year, during which over 100 rockets were launched,” Lerner said. “This operation, conducted following intense efforts and precise preparations, is a part of the ongoing IDF efforts aimed to diminish terror elements in the strip, and maintain security for the civilians of the State of Israel”.

Lerner added that Awwar, who came from Beit Lahia, was in the midst of planning future attacks against Israel. “This is what we were set out to stop,” he wrote on Twitter.

According to the IDF, Awwar was personally involved in terrorist activity as recently as April. He took part in two rocket attacks on Sderot, a southern community near the border with Gaza, as well as a rocket attack during Passover. Awwar was also part of an attempt to shoot down an IDF helicopter.

During the time of the strike, Awwar was reported to be riding his motorcycle. The targeted airstrike came hours after terrorists in the Strip shot a Kassam missile into southern Israel, where it landed near a main highway in the south.

Wednesday’s rocket attack was the second this week. On Monday, Red Alert sirens sounded in the south as terrorists fired a rocket towards Ashkelon. The rocket failed to reach Israeli territory and landed near the Gaza border fence on the Palestinian side.

“The IDF sees firing of rockets at Israeli territory as very serious and will continue to act strongly against any attempt to carry out terrorist activities,” the IDF said in a statement. “The IDF is prepared to defend the citizens of Israel.”

Israel’s Defense Minister Moshe Ya’alon told soldiers of the IDF’s Gaza Division on Tuesday that Hamas “preparing itself for a confrontation with Israel.” He made clear that Israel is “taking a very clear policy: quiet is being answered with quiet, and firing is being answered by a harsh response on our part.”

The strike is the first military action carried out by Israel in Gaza since the formation of the Hamas-Fatah unity government.

“It [Hamas] continues to plan terror attacks against Israeli civilians while in the Palestinian government,” the prime minister said in a statement. “I would like to remind the international community that Abbas committed to uphold all previous agreements the day he established the government with the terror group Hamas, meaning he is responsible for dismantling Hamas and other terror groups’ arsenals in Gaza.”

He stressed Israel’s clear policy of “kill or be killed.” Netanyahu vowed that the IDF and Shin Bet “will continue acting forcefully against anyone who tries to harm the security of the citizens of Israel.”

The US stated that despite the rocket attacks, the government would continue to support the Palestinian government.