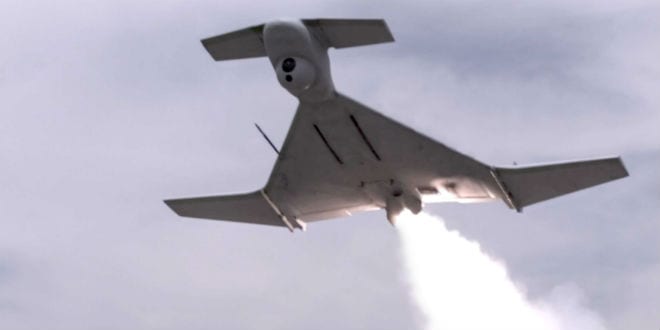 Harop is now one of the world’s most sophisticated and accurate UAV’s. With an ability to remain airborne for hours, Harop has the capability of diving and crashing into a precise target, much like a conventional missile. The UAV can receive instructions from as far as 1,000 kilometers.

Contained within the nose of the Harop is 10 kilograms of explosives. The explosives can either be detonated at impact or can be launched from various platforms, such as a ship or vehicle, to enhance its range.

Immediately after launch, the Harop’s wings unfold. Once flight begins, it is impossible to cancel the Harop’s mission. Operators of the UAV have the ability to lock on to targets that are both mobile and static.

According to IAI, hundreds of units have already been sold. Many Harop’s were specially outfitted with special cameras capable of seeing through severe weather and the dark.

The IAI factory, located in central Israel, recently began production on an even more advanced version of Harop. The next generation model will include a launch vehicle, thereby increasing operational flexibility and making it easier to mask the missile as an airplane.

In a demonstration, Harop’s flexibility was put to the test when it was able to carry out a precise strike on a building similar to those used by Hezbollah in southern Israel to hide its operational headquarters. In a second demonstration, the UAV also carried out a direct strike on a target on a boat out at sea.