Hamas: Time to Spill Blood of Israeli Soldiers and Settlers 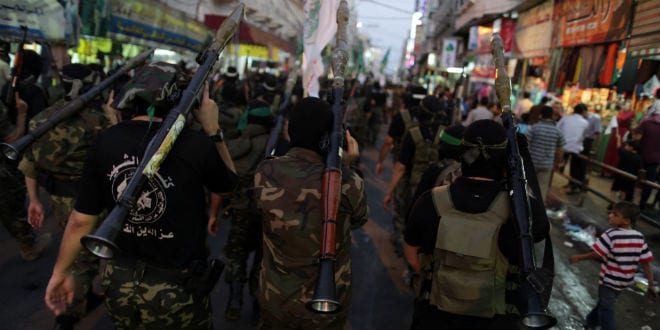 Hamas has called on members of its armed wing to rise up in Judea and Samaria and target Israeli civilians and soldiers in the area. According to a Hamas spokesman, the Gaza-based terror organization seeks to ease the plight of imprisoned Palestinian terrorists by urging armed resistance against Israel.

“We call on the men of the resistance in the West Bank, primarily the Al-Qassam Brigades, to fulfill their duty in protecting the prisoners on hunger strike by targeting the occupation soldiers and its settlers,” Hamas spokesman Hussam Badran wrote on his Facebook page.

“The occupation must pay a high price in the blood of its soldiers and settlers until it is persuaded to solve the issue of prisoners on hunger strike. This is everyone’s task, on the individual and organizational levels,” he wrote.

Over seven weeks ago, 125 Palestinian prisoners held in administrative detention in Israel launched a hunger strike in protest over their imprisonment.

On Monday, the Israeli government passed an emergency bill that would permit, with judicial approval, the force-feeding of prisoners. Many Israeli lawmakers disapproved of the measure, as force-feeding is a widely frowned upon practice in the human rights and medical community.

MK Moshe Feiglin (Likud) urged fellow lawmakers to reject the law. “What is this idea to force-feed prisoners?” he asked.

“If people want to die, this isn’t our problem. In the same week that the ministerial committees decides to [permit euthanasia], we are going to prohibit criminal from doing the same thing?…I urge you to reject this bill with contempt,” he stated.

Badran’s comments come at a precarious time between Israel-Palestinian relations. One week ago, a Palestinian unity government between Hamas and Fatah was established and endorsed by the US and EU, despite Hamas being designated as a terrorist organization.

The issue of prisoners almost led to the collapse of discussions between Hamas and Fatah leaders. On Monday, Palestinian solidarity protests for the prisoners were violently suppressed by Palestinian Authority forces. According to Hamas, three of its own MPs were physically attacked.

“Reconciliation is at risk due to the behavior of the PA,” Hamas MP Nayef Rajoub stated in Al-Resalah on Tuesday. Calling the PA attack “premeditated,” Rajoub said the attack on protestors and family members of the prisoners was “a clear message to the domestic reconciliation” and “a powerful stab in the back of the prisoner movement.”