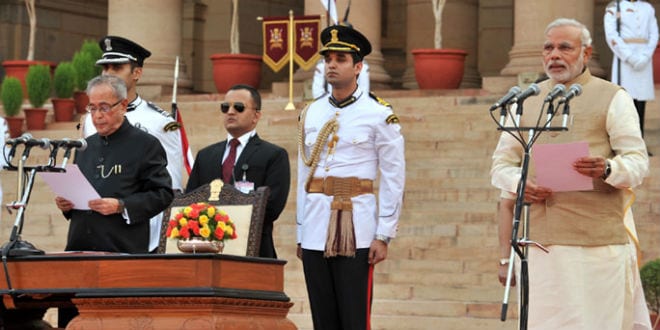 With a focus on Hindu nationalism and pro-market policies, newly elected Indian Prime Minister Narendra Modi promises to propel the country in a new direction. India and Israel have enjoyed increasingly close military and economic cooperation over the past two decades, and Modi also brings strong personal and business ties with Israel dating to his time as chief minister of one of India’s most wealthy and industrialized states.

Differences in size and culture aside, India and Israel have many modern and historical similarities. Hinduism and Judaism are among the world’s oldest existing religions, and both share ethno-religious components that set them apart from other major faiths. At the same time, both religions have complicated systems of laws, purity codes, and dietary restrictions that define their communities. In modern times, both India and Israel achieved independence from Great Britain during the late 1940s, after long internal struggles and bloody partition plans.

Yet for its first few decades of independence, India, under the direction of former Prime Minister Jawaharlal Nehru and his Congress Party, sought friendlier relations with Arab states and aligned itself with the third-world Non-Aligned Movement, which was often hostile to Israel. Despite similar national origins to Israel, India viewed the Jewish state as a proxy of the imperial Western powers.

This mentality didn’t change until 1992, when the end of the Cold War forced Indian leaders to rethink their global strategy, including relations with Israel. In January 1992, India and Israel opened their first bilateral diplomatic missions.

Since then, one of the most important aspects of Indo-Israeli relations has been military cooperation, with Israel becoming India’s second-largest military importer behind Russia.

Ningthoujam explained that the Indo-Israeli military relationship has evolved over the years “from a mere seller-buyer relationship” to a “relationship that has been transformed into that of joint-collaborations.”

Even though their military ties are strong, Israel and India have shared a mixed relationship since 1992, largely as a result of the Congress Party’s years of vocal support for the Palestinian cause as well as its reluctance to criticize Iran’s nuclear program.

But this hasn’t been the case universally in India. Modi’s conservative Bharatiya Janata Party (BJP), which now has outright majority control of India’s parliament for the first time in the country’s history, has longstanding warm ties with Israel dating back to when the BJP was part of a government coalition in the late 1990s and early 2000s.

“We are sure the BJP will give a boost to India-Israel relations based on past experience with BJP,” Bernstein-Reich said.

Ideological affinity aside, many inside the BJP are extremely grateful for the discrete military support Israel provided to India during its 1999 Kargil War with Pakistan, when Russia and other allies refused to help India.

Like the rest of the BJP, Modi “understands that Israel needs India for political reasons as a strategic ally, something that wasn’t there before, because India needed the oil of Arab countries, including Iran,” Bernstein-Reich said.

With his anti-terror attitude, Modi “will want to keep Israel close to him and not at a distance, like the Congress Party did,” she added.

Bernstein-Reich, who has worked as a technology entrepreneur in India and Israel for the past 17 years, met with Modi during his visit to Israel in 2007 as part of a high-tech agricultural conference. Modi, who served as chief minister of the Indian state of Gujarat from 2001-2014, forged strong ties with Israeli businesses during that time. India has a decentralized form of government, in which individual states and their leadership can develop economic and bilateral ties with foreign nations.

Under Modi’s leadership, Israeli companies poured billions of dollars of investment into Gujarat in areas like industrial research, solar and thermal power, pharmaceuticals, infrastructure, and water recycling and desalination plants.

“Modi understands what Israel can give to India technology-wise,” Bernstein-Reich said.

On the other hand, while Indo-Israeli economic ties have grown significantly to nearly $5 billion, bilateral trade between the nations has recently stagnated.

“There has been steady growth, but not enough in recent years because of the recession,” said Bernstein-Reich.

Additionally, one of the outstanding issues that Modi inherits as India’s new leader will be finalizing a Free Trade Agreement with Israel.

The Free Trade Agreement has been under negotiation for the past three years, and Bernstein-Reich explained that although the Congress Party was very friendly towards Israel, they “took their time” on the trade pact.

Bernstein-Reich predicts that once the agreement is signed, bilateral trade will increase substantially.

“It will be a unique agreement with India that will give special benefits to businesses in both countries,” she said.

Modi, meanwhile, has garnered significant attention for his strong Hindu nationalism, resulting in criticism from the West—especially for Hindu-Muslim riots in Gujarat in 2002. Yet his views in that area may also allow him to form an ideological bond with Israeli Prime Minister Benjamin Netanyahu, who is similarly chastised in some Western countries.

Shortly after his victory, Netanyahu said he spoke with Modi and expressed his desire to “deepen and develop” bilateral ties.

One of Modi’s first public gestures as prime minister was to visit the Ganges River, one of holiest places in Hinduism, where he promised to restore the heavily polluted river to its former glory. Over the years, Netanyahu has taken a similar approach, focusing on securing Israel’s Jewish heritage sites and insisting that Jerusalem remain under Jewish sovereignty.

Modi is also surrounding himself with like-minded ministers who admire Israel and its values.

Swaraj, who is the first woman to hold the post in India, has called herself a “strong fan” of Israel and a “strong admirer” of Israel’s first female prime minister, Golda Meir. She has also visited Israel and served as chairwoman of the Indo-Israel parliamentary friendship group in 2008.

“The fruitful cooperation between the two nations contributes greatly to tremendously important spheres of collaboration, including agriculture, water, research and development and more,” said a press statement from Swaraj.

Despite its size and natural resources, India has in recent years failed to keep pace with the advancements of China and other major Asian countries, as corruption and political divisions have caused economic stagnation. Many hope that Modi will give a much-needed boost to India in order for the country to compete globally. For tiny Israel, meanwhile, strengthening ties with major Asian nations is an important part of its 21st-century strategy.

“New Delhi (India’s capital) needs a country such as Israel who is willing to transfer technologies which are hard to procure from elsewhere, and this is not only in the field of military, but on other fronts as well,” Ningthoujam told JNS.org. “Israel had already proved its credibility [to India] in the past, and particularly during the Kargil War. So, it is a very important country to India.”