A Unity of Purpose Among the Nations: Saving Lives One At a Time

Home » A Unity of Purpose Among the Nations: Saving Lives One At a Time 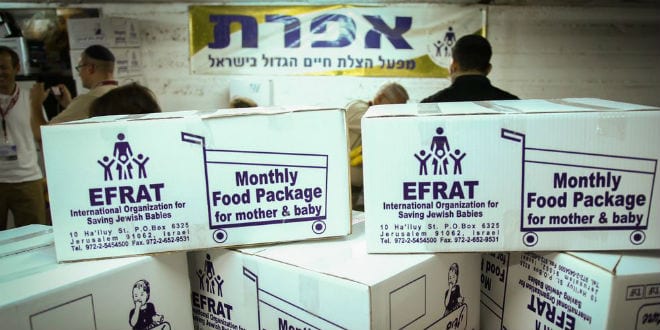 Joining the recent Israel365 mission to Israel, volunteers rolled up their sleeves and gave time, effort and energy while they toured around the country hoping to make a difference, even a small one, while visiting the Holy Land.

One place visited by the mission was the headquarters of the Save a Jewish Baby/EFRAT (SAJB) organization. Tour members took time out of their jam-packed schedule to help an organization responsible for saving the lives of over 57,000 children in Israel from abortions.

SAJB was founded in 1977 and has been instrumental in helping pregnant women in need make the choice for life. The organization has found that one of the top reasons women resort to having an abortion is due to economic concerns. SAJB helps support mother and child for the first two years should they continue on with the pregnancy.

Dr. Eli Schussheim, founder of SAJB, explained to the volunteers about how his experience as a doctor helped him understand why so many women resorted to abortion.

“When I was practicing, almost all of the women who came to me to have an abortion told me that they are having the abortion due to financial reason, because they felt that they could not support the child. I started to ask them what if there would be no financial burden from the child, if someone were to give them everything they needed for the first year or two years, would that change their minds. Many said yes, and that is how Save A Jewish Baby was born,” said Schussheim.

The tour group also met some of the other staff who work at the organization. Chani, a social worker, explained that “all of the women who call us, or are referred to us are contacted by one of our volunteers.”

“Our volunteers are very special people who have all gone through similar situations to what the woman is going through now. We try to pair each woman with a volunteer who has had a similar experience and comes from a similar background,” Chani said. “The women feel that no one can understand what they are going through. We show them that they are not alone, and that they can find help if they want it.”

Gideon, part of the technical staff, explained how packages containing diapers, wipes, cribs, clothing and formula for each of the mothers and children is packaged and then shipped off. The group was then invited to join in and help pack boxes themselves to take an active part in the process of helping these mothers in need.

While the group was busily at work, Dr. Schussheim regaled them with a touching anecdote of how he was recently invited to the wedding of a 26-year-old whom the organization had saved from abortion 26 years earlier. He explained that for each child, SAJB spends approximately $1,200, a very modest amount that is needed to save a life.

“Everyone who donates this amount receives a certificate with name of the child that they have personally saved,” Dr. Schussheim said.

SAJB, in spite of its charitable work, does not receive money from the government. It survives entirely based off of donations which they try to funnel one hundred percent of back into the work that they do. Everything is donated, from the money needed to buy the supplies to the very apartments and garages in which the organizations office is located.

Upon seeing the work that SAJB does each day, Rodney, one of the tour participants said: “There seems to be a unity of purpose within the Jewish People, on a deeper level than there exists with most other peoples. As a Christian I see a special godliness within the Jewish people. I’ve experienced the same feeling among Christians, but it is far more pronounced.”

Rodney explained that he believed the reason organizations like SAJB are able to exist is because of this special connection that the Jewish people have to one another and to their spiritual roots in Israel.

“The Jews have three things which are inseparable one from the other: the land, the Bible and the people. This is one thing that I have come to understand and appreciate while being here on this trip,” he said.

Leslie, another volunteer, was also incredibly moved by the experience. “People just don’t know what is going on here. We hear about Israel in such a different context, and then we visit somewhere like SAJB and these people really help and change the lives of the mothers and children that they touch. It is truly amazing,” she said.

A third member of the group, Emil, put the visit in context with the overall trip. “We visited Yad Vashem and it is a depressing place. You feel as if you have entered a long dark tunnel. But the important thing is that you know that there is a light at the end of it, even though it is long, you know it is there. And that holds true for history as well.”

“Going to a place life SAJB, one realizes that this is a part of that light, saving lives, Jewish lives in Israel. This is the light at the end of the tunnel that the Jewish People went through all those years ago, and the lesson I take from that, is that winners don’t quit, and quitters don’t win.”