Netanyahu: “Jerusalem is Our Heart…We Will Never Divide Our Heart”

Home » Netanyahu: “Jerusalem is Our Heart…We Will Never Divide Our Heart” 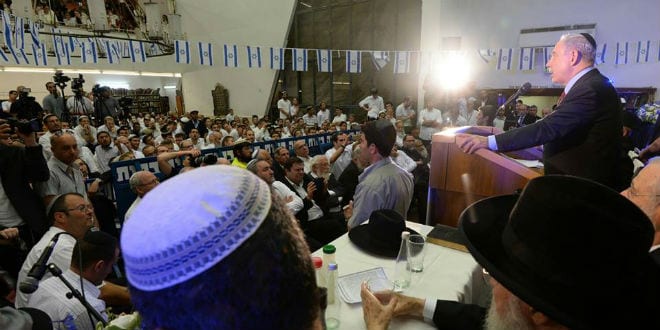 Israeli Prime Minister Benjamin Netanyahu reaffirmed Tuesday evening that Jerusalem is the heart of the Israel, the heart of the Jewish nation, and that the holy city will never be divided again.

Speaking at the annual Jerusalem Day celebration at the Mercaz Harav Yeshiva, the prime minister attended the festivities along with important political and religious Zionist leaders to commemorate the day Israel liberated Jerusalem from Jordanian control during the Six Day War.

“I feel at home in Merkaz Harav Yeshiva,” Netanyahu said. “it seems like home to me, because my grandfather knew Rabbi Kook zt”l (of blessed memory) well and because I knew Rabbi Avraham Shapira zt”l, father of the present dean, very well and respected him greatly.”

Netanyahu reflected on how Jerusalem, in as little as 47 years, has blossomed into a thriving city. “Those who remember Jerusalem immediately after the Six Day War, it was not a small village nor a large city…and today Jerusalem is a huge city,” Netanyahu said.

“Jerusalem is Yad Vashem, Jerusalem is Herzl’s burial place and the Mount of Olives, where my grandparents are buried, as is Menachem Begin,” he stated.

“And Jerusalem is also Mount Zion and Mount Moriah and the Western Wall, Jerusalem is Israel’s eternity, it is our heart, and we are guarding our heart – the heart of the nation. We will never divide our heart,” declared Netanyahu.

The prime minister told celebrants that he was there “to rejoice with you in the joy of Jerusalem, and I’m here to strengthen your hands for your diligence in the study of Torah.”

Also speaking at the event was Housing Minister Uri Ariel, who promised that Israel will no longer impose construction freezes in Judea and Samaria.

“There will be no more freezes, we will not accept delays and restrictions in Jerusalem, Judea and Samaria, and we will continue to build in all parts of our country,” he said.

“Jerusalem will not be divided again. Between the Jordan and the sea there will only be one state, and that is the State of Israel,” Ariel declared.