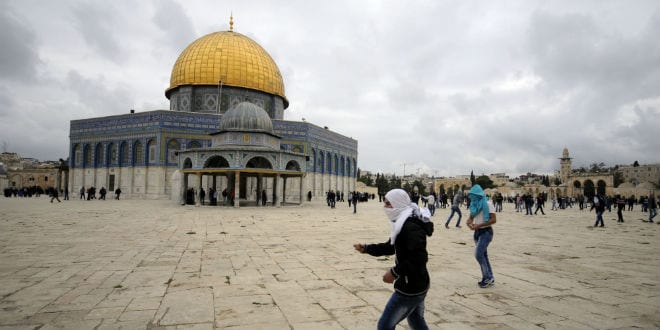 As Israel celebrates 47 years since the liberation of Jerusalem from the Jordanians, Israeli police closed down the Temple Mount Wednesday morning after clashes with Palestinian and Arab rioters.

Four Palestinians and an Israeli policeman were reported injured in the clashes as police and Israeli security personnel are on high alert throughout the city of Jerusalem. Following a security assessment, the police shut down access to the Temple Mount, police spokesman Micky Rosenfeld confirmed.

Police were forced to enter the compound after masked Palestinian rioters began throwing rocks and live fireworks at visitors entering via the Mughrabi gate. According to Ma’an News Agency, Israeli forces used rubber bullets and stun grenades to disperse rioters. Israel Radio quoted a Hamas news outlet as reporting that three of the injured were from Turkey.

Wednesday’s clashes are the second day in a row violence has broken out on the Temple Mount. On Tuesday, an Israeli policeman was injured when Palestinians attacked a group of Jews visiting the holy site.

The Muslim Waqf, which is in charge of the Temple Mount compound, accused Israeli nationalists of planning to march through the al-Aqsa compound as part of celebrations. The parade, which travels throughout Jerusalem, will end at the Western Wall.

Access to the Temple Mount has long been a point of contention between Israel and the Waqf. Jews are regularly banned from ascending to Judaism’s most holy site and are forbidden to pray on the site. Attacking Jews physically and verbally who visit the Temple Mount have become regular occurrences. A controversial new bill in the Knesset regarding Jewish prayer on the Temple Mount is being put to a vote in the Knesset by members of the Likud and Labor party.

The pope advocated for religious equality on the Mount, viewing it as a place for “all communities who look to Abraham.”

“May no one abuse the name of God through violence, may we work together for justice and peace,” Pope Francis implored.