EXCLUSIVE: 23,554 People the World Over Sign the Jerusalem Covenant

Home » EXCLUSIVE: 23,554 People the World Over Sign the Jerusalem Covenant 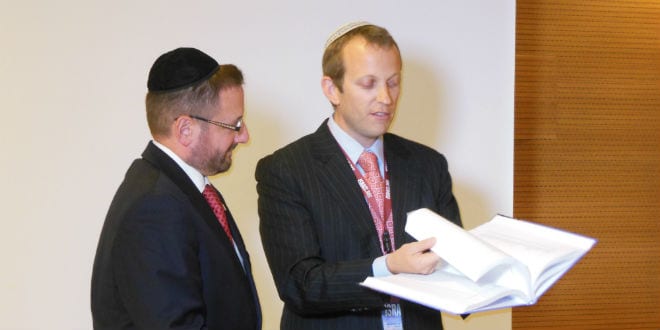 On Sunday, May 25th, during a rather busy visit by Pope Francis to Jerusalem, a group of Jews and Christians from around the world gathered together to honor the city of Jerusalem and express their unending connection with the holy city. In culmination of the tireless effort by the Israel365 organization, thousands of signatures were gathered in support of Jerusalem in a document called “The Jerusalem Covenant.”

The Jerusalem Covenant is a promise of faith made by the state of Israel to the city of Jerusalem. Originally created on May 31, 1992 and signed on the 25th anniversary of the reunification of Jerusalem, the covenant incorporates biblical passages as well as rabbinic texts that emphasize the importance of the connection to the city.

Last year, Israel365 reintroduced supporters of Zion to the Jerusalem Covenant and gathered 10,000 signatures which were presented to MK Gila Gamliel (Likud). This year, they more than doubled the amount of signatures.

Faith-based public diplomacy NGO Israel365 founder and director Rabbi Tuly Weisz  presented MK Rabbi Dov Lipman (Yesh Atid), himself a stalwart in Israel’s advocacy fight, with 23,554 signatures on the Jerusalem Covenant. The signators come from all over the world, hailing from Zimbabwe to Australia.

Lipman, who was very moved by the outpouring of support shown for Jerusalem, announced that he would present the signatures to the Speaker of the Knesset during this week’s plenum session. “I will make sure that the entire Knesset knows of the magnitude of what happened here,” said an impassioned Lipman.

Lipman went on to make a heartwarming speech to the crowd about the importance of Jerusalem being one city unified. “For thousands of years the hearts of the Jewish people have been in Jerusalem. Every celebratory event in our lives we remember Jerusalem. And now we are here, now it is happening. While Jerusalem was divided there was war. Since it has been reunified, all members of all faiths can pray freely at any of the holy sites.”

“There needs to be at least one place on earth that is the well-spring of spirituality for all peoples, and spread to the rest of the world. That place is Jerusalem. Only Jewish leadership over the entirety of Jerusalem will be able to vouchsafe the right of all religious peoples to worship in the city. Christians need to realize that if they want to have the freedom to worship in Jerusalem, then only Jewish rule over the city will be able to safeguard that,” Lipman stated.

When asked why the Jerusalem Covenant is so important, Lipman told Breaking Israel News: “The Covenant illustrates that the connection between the Jewish people and the city of Jerusalem does not stem from a war in 1948, but from the last 3,000 years of history. Other members of world governments don’t see that connection. They perhaps believe that the city should be divided or that Israel took it from other peoples. These signatures from citizens of other countries around the world show us that there are indeed people the world-over who believe that in the 3,000 year old connection. That they get it, and they support us.”