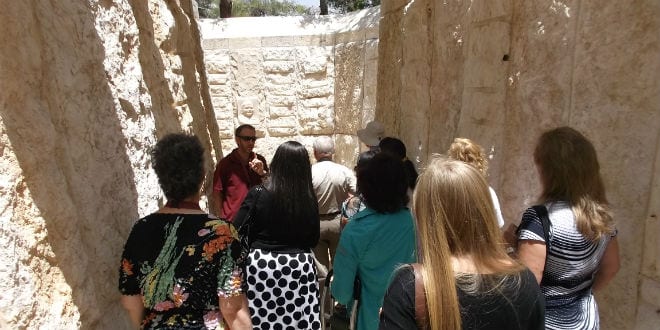 This year’s spring Israel365 trip was in full swing when the participants, hailing from all over the world, including Australia, Hong Kong, and the United States, made their way to Jerusalem’s Yad Vashem Memorial on the fourth day of their mission.

In keeping with the theme of how Israel as a nation commemorates tragedy and celebrates its bittersweet victories, the tour was led by world renowned tour guide Joshua Even Chen.

Joshua explained the nuances of the museum, from the style of architecture used at the site to get evoke certain emotions, to the deeper meaning of how each room was designed and the ideas behind each one.

When the group arrived at the Hall of Children, a section of the museum dedicated to the remembrance of the 1.5 million children that were killed in the Holocaust, Josh mentioned that the number of those children murdered is more or less the number of all the children in Israel today between grades 1-6.

The group was left to explore the Hall of Children themselves in order to perceive the feeling of being lost and the confusion faced by the children during the Holocaust.

“When you pass through this hall you are in essence learning to recreate the experiences you never had,” said Josh. “To put yourself in the mindset of the children who went through that tragedy. It changes you. You cannot walk out the same person as when you went in, just like they couldn’t,” he explained.

“The Holocaust was an abyss, and a darkness that are unexplainable, no matter how much we try, we have more questions after we think about it than we do before we began. And while we have some answers, the questions will always be bigger than the answers could ever be.”

Rabbi Tuly Weisz, Director of Israel365, brought the tragedy down to a more deeper level by sharing personal stories with the group about his own grandparents and great-grandparents, some of whom survived the Holocaust and others who did not.

During a tear filled story that left both Rabbi Weisz as participants reaching for more than one tissue, Rabbi Weiss shared the reason why his family decided make aliyah [immigrate] to Israel.

“We are here because to be in this land, to rebuild it, this is the destiny of the Jewish People,” he said.

After the emotional visit to Yad Vashem, the tour visited the EFRAT/Save a Jewish Baby (SAJB) organization dedicated to saving the lives of unborn children in Israel, as well as the Temple Institute in the Old City of Jerusalem, thus fulfilling the rebirth segment of the day, both physical rebirth as well as spiritual.

Rodney, who hails from Australia, reflected on his experiences so far visiting Israel.

“A person can read all the books they want about Israel, or about the conflict. But in order to get real perspective one needs to come and see it. I’ve been on two other organized trips to Israel before, organized by Christians, and they were both really good. They were well organized and meaningful. But coming on this trip with Israel365, organized by Jewish people, who are deeply connected to spirituality and to the land of Israel, is something that is so much more enriching and gives much better perspective than anything I have experienced before. And that holds true for the Christian sites as well. I’ve learned so much from Rabbi Tuly, and Josh. I am definitely coming back, and next time I am bringing my wife.”

Rodney was not the only member of the trip who was moved by the intensity and the deep rooted connection to the land that the participants got to experience during this trip. Donna, from the US, who is busily making preparations to purchase a house and a car in Caesarea, was incredibly moved by each of the activities that took place today.

“All I can say is Amen, and Hallelujah,” she said. “Seeing and experiencing first hand all of these amazing things has been very special to me.”

Even though Donna has been to Israel a few times before and will be moving here soon, she still took time out from her busy schedule in order to tour the country that will soon be her new home together with Israel365 because it showed her parts of the country that she had never been exposed to before.

Israel365 will be organizing a trip over the Feast of Tabernacles and the Jewish holiday of Sukkot, together with the International Christian Embassy of Jerusalem. If you are interested in finding out more information about the upcoming tour, please click here.