Pope: “State of Palestine” Has Right to Exist

Home » Pope: “State of Palestine” Has Right to Exist 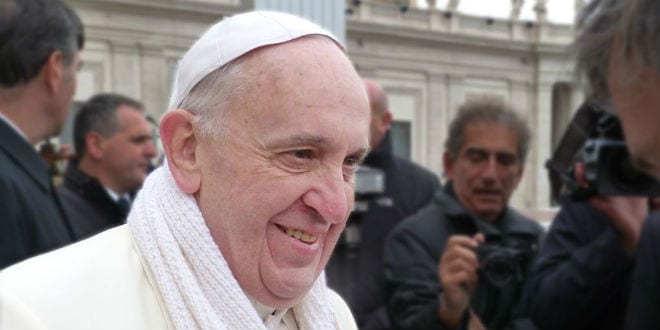 Pope Francis landed in the West Bank town of Bethlehem on Sunday morning as part of his two day tour of Israel and Palestinian territories. Greeted by thousands of followers, the pope arrived in a Jordanian military helicopter.

Speaking alongside Palestinian Authority President Mahmoud Abbas on Sunday, Pope Francis called the ongoing conflict between Israel and the Palestinians “increasingly unacceptable.” He urged both sides to unite together to make everlasting peace.

“The time has come for everyone to find the courage…to forge a peace which rests on the acknowledgement by all of the right of two states to exist and to live in peace and security within internationally recognized borders,” the Pope said.

Previous popes who have traveled to the Middle East have always visited Israel first and then the West Bank. Pope Francis, who is visiting the West Bank first, is offering a symbolic nod to Palestinian ambitions of independent statehood. The pope referred to the “State of Palestine” in his speech.

“The fact that he is coming straight from Jordan to Bethlehem, without going through Israel,” is blatant recognition of a Palestinian states, Hanan Ashrawi, a senior official in the Palestine Liberation Organization told AP.

Abbas thanked the pope on behalf of the Palestinian people for his efforts in supporting an “occupation-free Palestinian state with East Jerusalem as its capital.” Referring to Israel’s security fence which runs between Jerusalem and Bethlehem, Abbas stated that the pope saw “this disgusting wall with your own eyes.”

Ahead of the pope’s visit, the PA released a “security leaflet” which indicates the highlights of Pope Francis’s trip in the West Bank. The leaflet is dominated by a representation of the Israeli security barrier, titled “Annexation Wall,” and surround construction of Jewish settlements. The PA labeled the leaflet “State of Palestine.” Pope Francis led a mass in Bethlehem’s Manger Square, where around 10,000 people are thought to have attended. He drove through an open-top car through Bethlehem, which has put PA and Israeli security officials on high alert. Large crowds gathered hours before the mass.

According to Vatican officials, the meeting is aimed at bridging the rifts between the Roman Catholic and Orthodox churches which has lasted over 1,000 years.