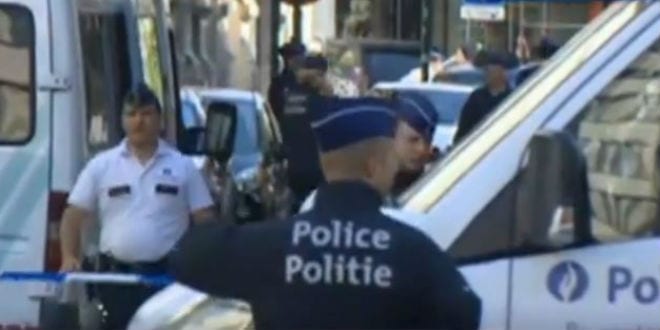 Three people were killed, one left critically wounded following a terrorist attack at the Brussels Jewish Museum on Saturday.

The shooting occurred Saturday afternoon. The La Libre newspaper reported that an Audi drove pulled up outside the museum and both the driver and passenger got out. The driver reportedly placed two bags on the ground and began opening fire on innocent bystanders before driving off.

Israel’s Foreign Ministry confirmed that two of the slain were an Israeli couple in their fifties from Tel Aviv touring the city. The families of the two, Mira and Emmanuel Riva,, have been notified. The Foreign Ministry is in contact with local police to fly the bodies to Israel as soon as possible for burial.

According to a report by the new site HLN.be, the third fatality was a female volunteer at the museum. The fourth victim is a 23-year-old employee who is hospitalized in critical condition.

Witnesses told HLN that the shooter aimed at the victims’ throats and heads. Israeli and Belgian officials have yet to release the names of the slain. Authorities are looking for the shooters.

Alain Sobotik, a bystander, told AFP that he saw the dead bodies of a young man and woman inside the doors of the museum. “The young woman had blood on her head. She was till holing a leaflet in her hand, she looked like a tourist,” he said. Images from the scene show the slain lying in a pool of their own blood.

Israeli Prime Minister Benjamin Netanyahu condemned the attacks, saying they were caused by anti-Israel and anti-Jewish attitudes that have been rapidly increasing in Europe.

“This act of murder is the result of constant incitement against Jews and their state,” the prime minister said. “Slander and lies against the State of Israel continue to be heard on European soil even as the crimes against humanity and acts of murder being penetrated in our region are systematically ignored.”

“Our response to this hypocrisy is to constantly state the truth, continue a relentless fight against terrorism and build up our strength,” he added.

“Throughout history, anti-Semitism has taken on many forms but at bottom has always been based on hatred of Jews merely for being Jews, whoever they may be and wherever they live,” he said. “That’s why activity termed ‘pro-Palestinian,’ activity that once again, just like in those dark days, calls for the boycott of ‘Jewish goods,’ and aggressively targets the only democracy in the Middle East, is nothing by anti-Semitic.”

Liberman said that Saturday’s attack, coupled with the attacks on Jewish targets in Toulouse, France and in Kansas City, “are a large, blinking warning light to all those who, consciously or not, collaborate with this incitement when they are so quick to condemn Israel, time and time again, and compare the construction of a house for a Jewish family in our ancestral land to murderous and cruel terror attacks carried out by villainous anti-Semites and terrorists, whether in Gaza or in Brussels.”

Belgian authorities have yet to determine whether the attack was based on anti-Semitism. Interior Minister Joelle Milquet said that it was too early for authorities to label the attack as anti-Semitic but “there are strong grounds for presuming so.”

Approximately 40,000 Jews live in Belgium, with half residing in Brussels. Anti-Semitic attacks in Belgium were at their height in the 1980s. In 1982, a gunman opened fire at a Jewish synagogue in Brussels, critically wounding four people.

Saturday’s attack comes on the eve of elections in Belgium for a new federal government, European parliament, and regional parliaments.