In Israel, Pope Francis to Witness Oasis of Stability in Chaotic Region for Christians

Home » In Israel, Pope Francis to Witness Oasis of Stability in Chaotic Region for Christians 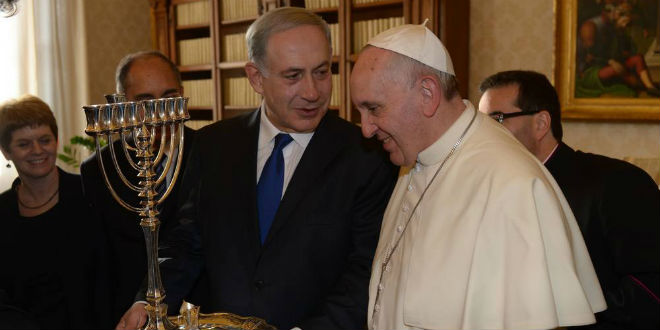 Following in the footsteps of his two immediate predecessors, Pope Francis will embark upon a historic visit to Israel, Jordan, and the West Bank from May 24-26.

Throughout his career, Francis has shown a deep appreciation for the Jewish people and has made Jewish-Catholic relations a top priority. Yet this month, Francis will arrive in a Mideast region beset by uprisings, sectarian violence, and religious extremism, where Christians are routinely being driven from their homes and persecuted by Islamic fundamentalists.

As one of the few areas of stability and prosperity in the region, Israel has become an important ally for Christians. As such, on his trip the pope will face the dual challenge of confronting extremism, while also promoting reconciliation between the region’s Christians, Jews, and Muslim

“The Vatican is hoping this trip promotes unity among Christians, encourages Christians in the Middle East to remain committed, [while also] improving relations with Jews and Muslims,” John Allen, an associate editor for the Boston Globe who has covered the Catholic Church for nearly two decades, told JNS.org.

A major challenge Pope Francis and Vatican officials face, however, is walking the fine diplomatic line between support for Israel and staying on friendly terms with Arab-Muslim-majority countries, which are home to many Christians and important holy sites for the religion.

“The Vatican tries to take a neutral position on many of the political controversies in the region,” Rabbi Dr. Eugene Korn, the Jerusalem-based director of the Center for Jewish-Christian Understanding and Cooperation (CJCUC), told JNS.org.

The Vatican, said Korn, “is enormously fearful of Christians who are being persecuted and are fleeing Muslim countries in the region,” and doesn’t want to provoke more violence against them by taking sides.

Nonetheless, privately, Vatican officials are often vocal in their support for Israel and grateful for the basic protections it provides to Christians and their holy sites.

“The reality is that most Vatican diplomats are inclined to be supportive of Israel because they know whatever problems Christians in Israel face, pale in comparison to the problems they have in the rest of the Middle East,” Allen explained.

“Many native Arab Christians in Israel do complain about being second-class citizens, facing travel problems and discrimination,” he said. “But they are not getting shot like they are in Syria, Egypt or Iraq. There is a great deal of sympathy for what they see as basic security, rights and rule of law in Israel.”

Israel has one of the few Christian communities left in the Middle East that is still growing.  According to 2013 figures released by Israeli Central Bureau of Statistics, there are roughly 161,000 Christians living in Israel, up from 158,000 in 2012.

At the same time, Christian populations elsewhere in the region are rapidly declining. According to the Pew Research Center, just 0.6 percent of the world’s 2.2 billion Christians now live in the Middle East and North Africa. Christians make up only 4 percent of the region’s total inhabitants, drastically down from 20 percent a century ago.

In Israel, the Christian community largely thrives, regularly outperforming Jews and Muslims in education. But that is not the case in Palestinian-controlled areas. In Bethlehem, the birthplace of Jesus, Christians have declined from about 70 percent of the population a few decades ago to only 15 percent today.

“Being Catholic and living in Israel and in the Holy Land is without a doubt a grace and a privilege for many reasons; it means being close to the Holy Places, to local Christians, especially those belonging to the Eastern Churches, and to the Jewish people,” Father Francesco Voltaggio—rector of the Galilee Seminary, a Catholic-Jewish dialogue center founded by Pope John Paul II—told JNS.org.

Voltaggio, who will meet Pope Francis during his visit, feels that the trip will cement Catholic-Jewish relations while also being an important opportunity to open dialogue with Muslims.

“I expect a step forward in the renewed relationship between Christians and Jews, as well as an opening of hope in the dialogue with Islam, a dialogue that is often marked by wounds, yet is necessary today more than ever, so as not to prevent tragedies, like the violence caused by fundamentalism,” Voltaggio said.

While most of Pope Francis’s itinerary in Israel will take him to the usual spots visited by heads of state—such as Yad Vashem and the Western Wall—as well as to meetings with to Israeli leaders, the most remarkable aspect of the trip may be the trend it is setting.

“This is the third consecutive pope who has visited Israel,” Korn said. “This is going to establish an informal policy for popes in the future.”

“It really strengthens the Vatican policy of coming to Israel and paying homage to the Jewish people,” he said.

But despite the goodwill developed between the Vatican and Israel, several obstacles remain. One of the largest is that the “Fundamental Accord” signed by Israel and the Vatican in 1993, which established relations between the two states, has not been finalized—leaving Church properties in Israel in a state of limbo when it comes to taxation or other administrative areas.

“You can find fault on both sides [for not finishing the agreement]. But the fact that this has been dragged out for so long has become a source of irritation in the Vatican,” Allen said.

One of the points of contention related to this area has been the status of the Cenacle—the traditional site of the Jesus’s Last Supper on Mount Zion in Jerusalem. Jews also revere the building containing the Cenacle, as the tomb of King David. Hundreds of religious Jews recently held a protest against the building’s rumored transfer to the Vatican during the pope’s visit.

Lior Haiat, an Israeli Foreign Ministry official who is handling public diplomacy for the papal visit, said rumors surrounding the impeding transfer of sovereignty over the Last Supper room, as part of finalizing the 1993 agreement with the Vatican, are “untrue.” Nevertheless, he said Israel has been in discussions with the Vatican over the status of Christian holy sites.

“We are having a very long negotiation process with the Vatican, not only on this issue, but on a lot of issues regarding the Vatican’s presence in Israel and the holy places,” Haiat told JNS.org.

Pope Francis has also sparked some controversy in Israel over the short duration of his stay. He will give almost equal time to the Palestinian Authority.

“The pope’s visit to the Palestinian Authority is being considered a state visit by the Vatican. We obviously don’t agree with that point of view,” Haiat said.

Another sensitive subject in Jewish-Christian relations in Israel is the so-called “price tag” trend, which refers to vandalism carried about by Jewish extremists targeting Christian, Muslim, and even some Jewish landmarks and symbols.

In early May, the Catholic Church in Israel issued a statement condemning the attacks after the Office of the Assembly of Bishops in Jerusalem, the Church’s central authority in Israel, was found spray-painted.

“We have had a long dialogue with the Vatican and Catholic officials in Israel over the [vandalism] issue and they understand that we are doing all that we can to stop it,” Haiat said.

The papal trip should also shed light on the Vatican’s views on the Israeli-Palestinian conflict. Pope Francis arrives in the Jewish state following a breakdown in peace talks, with the Palestinian leadership taking unilateral steps in the international arena and forming a unity government with the terrorist group Hamas.

One of the Vatican’s biggest concerns in the region is Islamic fundamentalism, which has led to increased attacks on the region’s Christians. Vatican officials feel that solving the Israeli-Palestinian conflict could indirectly reduce the persecution of Christians.

“The Vatican’s diagnosis is that the fundamental threat of Christianity in the Middle East is Islamic fundamentalism. Their view is that the [Israeli-Palestinian] conflict ought to be resolved. If there is no constant reservoir of rage against Israel, it would reduce the persecution of Christians,” Allen said.

But such a linkage between the peace process and the region’s instability has been strongly disputed by Israeli leaders, who view the Israeli-Palestinian conflict as being driven by Islamic extremism.

Yet broadly speaking, two decades after Israel and the Vatican formally established diplomatic relations, the Catholic Church has come a long way in its relationship with the Jewish people.

“[There] is a sense of enormous comfort between the Church and Israel,” CJCUC’s Korn said. “In a certain sense, the relationship is the best it is has ever been, both on a formal and informal level.”