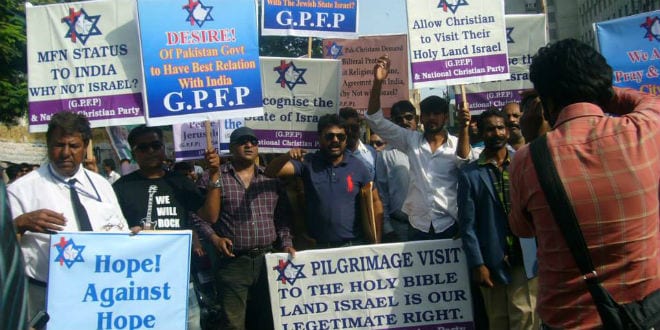 A group calling themselves God’s Peoples Fellowship of Pakistan (GPFP) protested last week outside the Karachi Press Club in Pakistan on the anniversary of Israel’s independence.  Their goal: to obtain the right to visit Christian Holy Sites in Israel on a Pakistani passport.

Israel has no formal diplomatic relations with the Muslim country.  In fact, Pakistani passports expressly state they are valid for travel to all countries except Israel.  The GPFP, whose stated aim is “to express Christian love for the house of Israel,” wants that to change.

“Jerusalem is [the] place where Jesus Christ (PBUH) [was] born and died. Visiting there for pilgrimage is our religious right,” Pastor Akram John, president of the King David Trust International told Pakistan Today. “Since partition, Christians are kept from visiting their holy sites in Israel.”

The GPFP represents Pentecostal Christians, who claim to number half of the country’s 10 million Christians. Christians are Pakistan’s second most populous minority group.

According to a statement provided by John, the GPFP demands that “Israel be recognized.”

Such an arrangement would not be unique in Pakistan.  In 1974, the country reached an agreement with arch-enemy India to allow Sikh pilgrims to enter Pakistan to visit their holy sites.

“Malaysia, also a Muslim country, already is in such an agreement with Israel,” said Chaudry Patras head of Pakistan’s Minority Affairs, a retired navy man who also works as a welfare officer for the Ministry of Defence.

The group has supporters in unlikely places.  “We also have taken Jamat-e-Islami (a conservative Islamist party in support of Sharia Law) and other religious parties on-board. They have no problem with (what we demand),” claimed Patras.

John was quick to clarify that the request was not for complete normalization of relations between the two countries.  “Unfortunately, our holy sites are located there. Otherwise, we don’t have any special attachment with Israel.”

Earlier, however, the GPFP did call on Pakistan’s leaders to recognize the Jewish state.  “We are making the demand yet again in view of the larger religious interests of the 10 million Christian people and the teachings of the Bible to enable them to visit the ‘holy land’ of Israel on the Pakistani passport,” GPFP General-Secretary Ashraf P. Butt said.