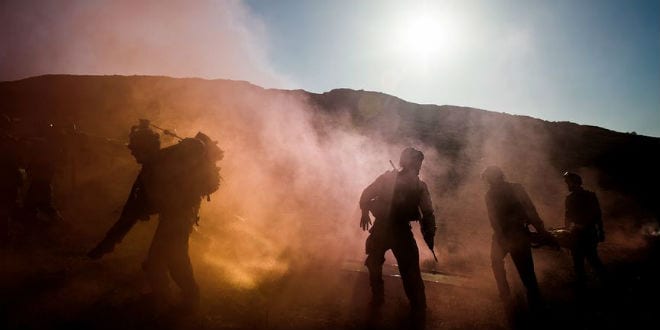 The IDF and US military conducted a joint large scale drill simulating a multi-front rocket attack on Israel by Gaza, Syria, Lebanon and Iran, Channel 2 reported.

Approximately 1,000 American soldiers stationed in Israel joined more than 4,000 of their Israeli counterparts in the simulation. Soldiers ran through several scenarios that simulated simultaneous rocket fire on Israel from several fronts.

The training exercise, called “Juniper Cobra,” is a five day drill that was first held in 2001 and is carried out every two years. The drill measures the military’s response to missile attacks.

Several of the scenarios tested Israel’s newly acquired US Patriot missiles as well as Aegis-type ships which can protect against ballistic missiles. In one complex scenario, large amounts of missiles and rockets were fired into Israel from different fronts.

Israel is practicing using its Arrow missiles, as well as the Iron Dome and Magic Wand system, which is still in development. The exercise between the two countries began shortly after the visit of US Secretary of Defense Chuck Hagel to Israel last week.

“The exercise will employ Israel’s entire rocket and ballistic missile architecture, including Iron Dome, Arrow, and David’s Sling: assets that the United States is proud to have helped Israel finance and develop,” Hagel said.

Sunday’s drill is the latest in a series of exercises conducted by the IDF to protect the state of Israel. The Israeli Air Force has been practicing for several months against incoming aerial attacks, including enemy fighters and drones.

The drill also comes at a time in which Israel defense company Elbit systems announced a $20 million contract with the US Marines. Elbit’s US subsidiary, Elbit Systems of America, LLC, was awarded two contracts that would help upgrade the US Marine Corps’ Bell AH-1W helicopter fleet.

The second contract, totaling $8.5 million over a 15 month period, will add tactical video data link (TVDL) technology to the aircraft. Through on-board sensors or external sources such as ground troops, the TVDL provides aircrew with real-time data to quickly respond to threats.

“The AH-1W is on the front lines in the battle against those who wish to harm America. These new technologies give our Marines capabilities and a level of safety never before experienced.”