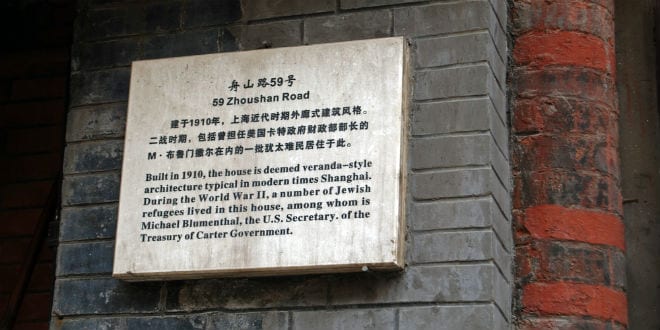 It was a long trek: 6,000 miles by boat from Central Europe to the Far East. But the towns of East Asia opened their gates for the waves of Jewish emigrants who had to find shelter from the tragic problems they faced first in Russia, and later in Central Europe.

Though some believe their story still flies under the radar when compared to the prevalence of other Holocaust-related discourse—perhaps because most of Shanghai’s Jewish residents viewed their time in the city as a transient stage—historians now know there once was a large and thriving Jewish community in China. Records of immigrants kept by the Hebrew Immigrant Aid Society (HIAS), which operated in the Far East from 1917-1950, paint an indelible picture of Jewish refugees who survived the war in Shanghai.

“The United States, Canada, Australia closed the doors to Jews and other immigrants in the 1920s. … HIAS had to… find other places that were willing to allow Jewish refugees to live there,” Mark Hetfield, HIAS president and CEO, told JNS.org. “Desperate measures called for creative thinking.”

The first Jews, Silk Road traders, arrived in China in the 8th century and settled in Kaifeng. The next Jews were those who arrived under British protection following the First Opium War. Many of these Jews were of Indian or Iraqi origin, due to British colonialism in these regions, and they became the largest dealers in opium. These included David Sasson (the “Rothschild of the East”), philanthropic businessman Sir Eli (Eliazer) Khadori, and real estate mogul Silas Herdoon. According to most accounts, the number of Sephardic Jews in China totaled around 1,000.

Around 4,000 Jews would then arrive as refugees from the Russian Revolution of 1917. Finally, as many as 18,000 Jews arrived as refugees from the Holocaust in the late 1930s and 1940s. According to Peter Nash, a child survivor from Berlin who found refuge in Shanghai from 1939-1949, about 8,000 of these refugees originated from Germany and 4,000 came from Austria.

Japan’s win left Shanghai as the destination for the last refugees. The city was under a mosaic of rulers: the international settlement controlled by England and the U.S. with Japanese-controlled Hongkou on the northern Suzhou Creek, the French Concession, and the two Chinese districts that had grown up around foreigners of many nationalities. This mosaic is what enabled easy entry into Shanghai for Jews who were relieved of their citizenship from Germany and considered “stateless,” said Jody Hirsh, a former Jewish Community Center program director in Hong Kong. It was not Chinese humanitarianism that allowed for Jewish entry into Shanghai, but the absence of passport controls.

The Jewish refugees arrived from Central Europe without any means of support. The Sephardic Jewish community, with the help of HIAS, provided the thousands of emigrants with food and shelter. A 1939 report by M. Speelman, chairman of the Committee for the Assistance of European Jewish Refugees in Shanghai, said upwards of $3 million in aid was sent to the Jews of Shanghai through the Jewish Aid Committee between November 1938 and December 1939.

Anti-Semitism was not a factor in China or under Japanese rule. An August 1939 memorandum by the Japanese Consulate General acknowledged “the equality of all races and creeds and having pity with the misfortune of the Jews.”

Liliane Willens, born in Shanghai in 1927 to Russian Jewish immigrants, described her early life as “upper/middle class” and “privileged.” She never felt discriminated against for being Jewish when she attended a French school under the Concession with other nationals. Her primary language at school was French, and English and Russian were spoken at home.

According to reports, Jewish refugees in Shanghai were in no way oppressed and enjoyed the same freedom as other Europeans who arrived in Shanghai. It was true that new regulations were put forth soon after Pearl Harbor, requiring Jews to reside in a restricted area, often mistakenly referred to as a ghetto, which was under the control of the Japanese authorities issuing their permits. But that was the only restriction on Jewish life.

“Under pressure from their [German] allies … a designated area was [created] in March 1943, forcing all Jewish refugees who arrived after 1937 to move into this area. But about half of the refugees—including my family—were already living in the area. This area was patrolled on the extremities by Jewish wardens. You could leave the area on application, provided return was made by a certain time,” Nash said.

Yet there were challenges. The restricted area was poor and diseases were rampant. Yvonne Daniels lost her older brother to malnutrition in Shanghai. She noted that many women who found themselves pregnant aborted the babies because “it was so difficult to nurture an infant.”

But Daniels is grateful for the chance she was given. One of roughly 18 babies born in 1944 in Shanghai to survive, she told JNS.org she is grateful for the two-and-half years she spent there. Had she been born in Germany, she said, it is likely she would not be here to tell her story.

Nash noted that the Chinese benefited from the large numbers of Jews that arrived because the Jews gave them an economy in a ghetto district. Jews created businesses, cafes, and factories, which needed Chinese basic materials, equipment, and services, as well as employees.

“The Jews came there as refugees with nothing and they left it a much better community,” said Tokayer, who will speak May 18 at the Jewish Museum of Maryland about his new book, “Pepper, Silk and Ivory: Amazing Stories about Jews and the Far East.”

Simultaneously, Jews built their culture and community in the city. The Russian Ashkenazi community, according to Willens, built Ohel Moshe Synagogue, which is now a Shanghai government museum focusing on the Jews who once lived in Shanghai. There were six other synagogues built in the area around the same time, said Willens. Among them, today only Ohel Rachel functions as a place of worship. Tokayer said most of the Jews currently living in Shanghai are students and entrepreneurs.

Yet despite Shanghai having served a vital role in their lives, Jews looked to get out while China transitioned to Communist rule in 1949, Tokayer told JNS.org. Sephardic Jews, at risk of losing their bank accounts and businesses, fled abroad. Russian and German Jews opted for Mandatory Palestine, which welcomed all Jews. Others were able to secure U.S. visas.

“While it was no secret, relatively few in the global community were aware that there were Jewish communities living in Shanghai,” Nash said.

Why? Some conjecture that Jews usually look to the West rather than the East. But Willens has a deeper explanation.

“The Central European refugees [who came to Shanghai] were often doctors, lawyers, professionals, musicians,” she told JNS.org. “They were the top people in Germany and they ended up in a Shanghai camp, poverty stricken. I have a second cousin whose husband is a Shanghai refugee. He never talks about it. It is as if he is ashamed.”

Daniels, meanwhile, believes privacy was just part of being a survivor. Many survivors were hesitant to talk about the past, but chose instead to move on with their new lives.

Hetfield of HIAS, however, stressed the importance of recounting the stories of Far East Jewry.

“The rest of the world turned its back on us,” he said. “We can never again let this happen to us or to anyone else.”