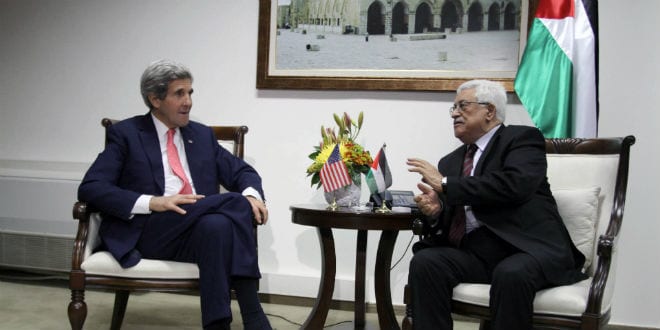 US Secretary of State John Kerry will reportedly meet with Palestinian Authority President Mahmoud Abbas in London on Wednesday to discuss kick-starting another round of peace talks with Israel, AFP reported.

An anonymous Palestinian official told AFP, “The meeting will discuss a possible resumption of negotiations with Israel.”

State Department spokeswoman Jen Psaki confirmed the meeting but denied that the two leaders were meeting with the purpose of discussing Mideast peace talks.

“While the door remains open to a peace process, the purpose of the meeting is to discuss our ongoing relationship with the Palestinians,” she said.

The expected meeting between Kerry and Abbas has created hopes that a new round of peace talks will take place. “The meeting could be the last attempt by Kerry to revive negotiations,” the Palestinian official said.

The last round of US-led peace negotiations between Israel and the Palestinians completely collapsed ahead of their April 29 deadline. Israel refused to release Palestinian terrorists from prison without a promise from the Palestinian’s that they would agree to extend peace talks into the upcoming year.

In turn, Abbas responded by submitting applications to 15 international treaties and UN bodies in complete violation of previous agreements with Israel. The Palestinians also announced on April 23, in a surprise move, that it would form a national unity government with the Hamas terrorist organization.

Israel officially canceled peace talks with the Palestinians upon the announcement of the new government, with Israeli Prime Minister Benjamin Netanyahu saying that his government would never negotiate with terrorists.

The US, which designates Hamas as an international terrorist organization, has threatened the PA that should it unite with Hamas, the US would cut off all aid. Members of Congress are already taking steps to formalize the process to cut aid should the unity government form.

Hamas has vowed repeatedly that it would never recognize Israel and is intent on destroying the Jewish state. Last week, Hamas published a threatening video in honor of Israel’s 66th Independence Day where it promised to drive all the Jews into the ocean and kill those who stand in their way.