One Woman’s Understanding of Real Independence 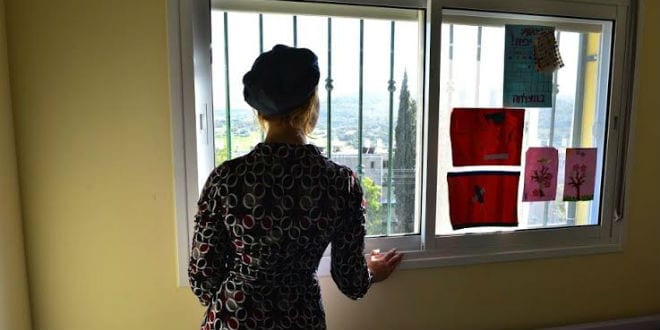 This personal essay was written by a former resident of Bat Melech and translated by Amy Beth Oppenheimer.

“Independence”. An incredible word. A word that encompasses in itself an entire world of feelings.

Today I am able to understand all of the Jews in the Diaspora, who only wanted one tiny thing, which was actually a huge undertaking – independence.

They wanted a place where they could express their opinions, speak their language, and live their beliefs without the fear of someone who thinks differently sabotaging them, hating them or giving them this awful feeling of lack of belonging and of not being their own master, but rather being under another’s complete control.

Today I am an independent woman! But in the past, this was not so. Everything was different, entirely different… I was a battered woman and I didn’t even know what it meant to be a battered woman. I was bound in ropes that no one could see and encaged in places that eyes did not reach.

Every movement, every smile, every word and even every thought were considered in advance, with the knowledge that perhaps they would not be to the satisfaction of… we’ll call him the “man of the house”.

I knew that everything in life has a price. And if my character traits and behavior did not meet the expectations of the “man of the house”, there would be punishments. I would need to deal with the consequences and pay the price. And it was a heavy price to pay.

In addition to the intense violence and regular sexual abuse, he had more creative punishments in store for me. I never knew if that day I wouldn’t be able to have a telephone conversation with my mother, or perhaps I would be forbidden to participate in the celebration of my brother’s wedding. Just as often, our children would be banned from participating in their clubs and extra-curricular activities, and many evenings I endured the torture of simply not having the “right” to sleep.

Yes, I know. It sounds villainous, unrealistic and perhaps unbelievable. This is correct. Even I didn’t believe it was happening to me. I didn’t want to, or perhaps I wasn’t able to believe that this was happening to me, that I was the “leading lady” in this awful and disgusting story called life.

But as always, we have that moment in life – the straw that breaks the camel’s back – and he came and beat me like he had never beaten me before…

It was a wintery day… and just as outside it was storming with heavy rains and violent winds, it was very much the same inside of our house. During the day, I was the recipient of all kinds of accusations and claims that I did not fulfill my duties as a mother or wife, including the particularly serious accusation that I stole money from the “man of the house”! It doesn’t need to be said that the shouting and physical violence that day were grievously awful and hard.

As the hours passed and it was closer to dinnertime, I proceeded to get the children showered and tuck them into their beds. It was then that I realized that my cell phone was hidden from me, the door of the house was locked and the key was resting in the pocket of the “man of the house” who had not forgotten his anger.

And so on that same day, the “man of the house” informed me that my mental health situation was dire, and he demanded that I check into an insane asylum for psychiatric treatment. If I did not do so from my own free well, he would arrange for it himself by force.

“You are not walking out of this door, except in a straight-jacket”, he leered.

I was scared. I was scared to death. Up until that day, my body had no longer been my body. It belonged to him at any time he wanted it and in whichever way he wanted it.

My thoughts had been bent to his will. All of my days and hours belonged to him. But now he wanted to claim my soul, too?!

I sat on the floor (I was never allowed to sit on the couch) and begged and cried for hours by the door. I just wanted one thing: to go, to leave and be free, to no longer be imprisoned in his cage.

Suddenly, the cave in which I had been living all these years was revealed before my eyes. And it was frightening. So very frightening and terrifying. And then…

“I’ll let you leave on one condition. That you prove that you are sane!”

“Give yourself to me. And then I’ll see that everything is okay with you.”

And so, for the last time, I gave my body over to him. I looked at myself from the side, seeing the situation from the outside as though an observer, and I said to myself “No more!”

The doubt about whether to come to a shelter for battered women was tremendous. I would be breaking up my family. How would the children react? What would the extended family say? How would I cope alone? And how, as a religious family who takes Judaism seriously, would I be able to guard and continue the education of my children?

A number of days later, I arrived at “Bat Melech”, and they saved my life. They saved my children. They saved me from myself, and helped me get back my sanity and my independence.

I was received at Bat Melech by a staff that was warm, loving, ethical and professional, a staff that enveloped us and escorted us from the instant that we arrived at the shelter. At Bat Melech, they enabled me to return to myself and to rehabilitate my self confidence and my ability to believe in humanity.

Only at the shelter did I begin to admit to myself the knowledge of what happened and what I experienced. With the help of the staff, I returned to being a living, breathing human being who thinks, wants and dreams about a future and looks forward to it.

My children have started to finally smile. They feel protected. They have found friends, from whom they don’t need to hide what happens at home. And they have started to create for themselves a sane world to which they can return.

The departure from the shelter was not at all easy. I was suspect of returning to the community that we had come from. I was nervous of the reactions, the sideways glances and the way that my children and I would be treated. I didn’t know if they would welcome us with open arms or spit on us and throw us out of their midst.

Therefore, with great sadness and a lot of pain, we left our entire previous lives, and started a new page, entirely clean and smooth, in a place where no one recognized us or would judge us on what we had been through. And finally in this new place, we were accepted with a warm and loving embrace.

At the beginning, I was still a wounded soul who was living the isolated life of a refugee. And then, stage after stage, I learned to march and then run and today… I am girded with strength and can even say that I fly.

Today I roll this word on my tongue with tremendous pleasure and love and particularly with a lot of pride – “independence”.

One small yet excellent word with so much power.

Bat Melech is the only shelter for religious victims of domestic violence in all of Israel. Bat Melech offers food, shelter, therapy, childcare, legal representation and transitional assistance to women and families throughout the country. Visit www.batmelech.org and follow us on Facebook at www.facebook.com/batmelechShelter