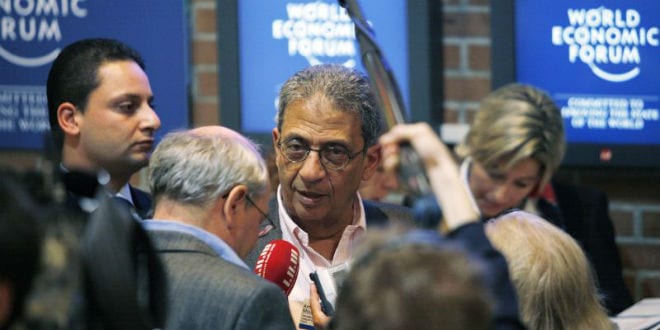 Egypt’s former foreign minister said on Wednesday that in order to bring to fruition the dream of a Palestinian state, Hamas must recognize the existence of Israel.

“It is normal for the Palestinians to reconcile,” Amr Moussa said, referring to the newly struck national unity agreement between rival Palestinian factions Hamas and Fatah.

However, “I believe that Hamas should declare its acceptance of the Arab initiative of 2002, which is the map of normalization and recognition of the state of Israel together with the establishing of the Palestinian state and the withdrawal of occupied territory,” he added.

“If Hamas does do this, it would be a major step in the direction of formulating a favorable all-Palestinian policy towards the Palestinian-Israel conflict,” Moussa said, according to AFP.

Referring to the Arab Peace Initiative of 2002, the plan proposes that Israel withdraw completely from Judea and Samaria in return for normalized relations with 22 Arab countries.

On April 23, Hamas and the PLO, which is run by Palestinian Authority President Mahmoud Abbas’s Fatah party, stunned both the US and Israel by announcing a reconciliation agreement that would form a unified Palestinian government.

Under the new deal, both sides would work together to form an “independent government” of technocrats led by Abbas and hold new elections.

Israel and the US have both blasted the agreement and view the Palestinian Authority as siding with terrorists. Israel officially cancelled the last round of peace talks with the Palestinians following the announcement. Israeli Prime Minister Benjamin Netanyahu said that his government would never negotiate with any government run by terrorists.

The US warned the PA that it would cut all aid in the form of around $440 million should it continue to take steps to form a government with the Hamas terrorists. Congress is already taking steps cut off aid should the new government come to fruition.

Moussa, who served as Egypt’s top diplomat from 1991 to 2001 and secretary general of the Arab League until 2011, is a close advisor to former Egyptian military chief Abdel Fattah al-Sissi who is poised to win elections in Egypt next month.