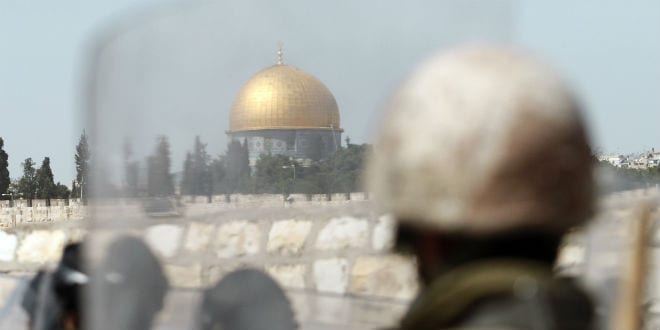 Pastor Keith Johnson, head of the Biblical Foundations Academy, was recently expelled from the Temple Mount by Waqf security guards for talking to a Jewish person while on the mount. He did not break any of the Waqf’s “illegal rules” of praying or reading a bible on the mount but simply greeted Yehuda Glick, who heads the Liba foundation.

Johnson’s visit took place only days after a series of violent protests broke out on the Temple Mount. During the Jewish holiday of Passover, riots broke out on the Temple Mount compound as Palestinians violently protested a visit to the holy site by Jewish pilgrims and tourists. Dozens of Palestinian protesters and an Israeli policeman were wounded during clashes, which resulted in the closure of the site to non-Muslims the following day. Muslim worshipers can be seen in a recently surfaced video anti-Semitic sentiments at the Jewish pilgrims, even throwing shoes at an ultra-Orthodox group of children and adults visiting the compound.

“I feel that there is something significant going on in Israel which I witnessed during my last visit,” Johnson explained to Breaking Israel News. “This is something that happened to me, and was very difficult for me to understand. But sometimes a difficult thing needs to happen in order to bring about the end of something.”

“This occurrence will hopefully shine light on the issue and help bring about a resolution that will allow all the children of Abraham to be able to pray on the holy mountain.”

Pastor Johnson, who lives in Charlotte, North Carolina with his family,  was leading a group visit to Israel and brought his tour on their final day to the Temple Mount as the culmination of their visit to Jerusalem. Having previously organized a tour to Israel, this was the second time Pastor Johnson had ascended the mount.

The tour visited the Temple Mount early in the morning and after waiting in line for a long while were finally able to ascend the mount. Pastor Johnson described his shock and the shock of the members of his tour at hearing a cacophony of screaming Arab women chanting angrily upon their arrival. Everyone was appalled by the treatment of the Arab women.

Following his ascension, Pastor Johnson saw Yehuda Glick begins Johnson’s recounting of the events leading to his removal from the Temple Mount compound.

“I saw Yehuda Glick who I had met earlier. I invited him over to our group and he took two minutes to say hello to us and explain a bit about a book that he had with him. Immediately as he left, three Waqf security guards rushed me and started giving me a hard time about greeting a Jewish person,” he recalled.

“They attempted to kick off my entire group from the Temple Mount. They insisted the entire group leave because I spoke to Yehuda. One member of my group happened to be from Egypt and spoke Arabic. He began speaking to the guards and convinced them that the group could stay while I would be removed. I was escorted off the mount, and then I went around, got back in line and immediately went up again.”

The event bothered Pastor Johnson greatly. Upon his return to the US later that same day, he made a video which was shown at an emergency conference of the Liba Foundation who is dedicated to “reaching complete and comprehensive freedom and civil rights for Jews on the Temple Mount”.

“A Jewish or Christian person needs to be able to pray on the Temple Mount without being harassed,” said Johnson. “There is common ground at this place, because everyone feels that this is a holy place, and it is a rallying place for everyone to worship the God of Abraham. Those same religious rallying places can be the hot spots for unrest and tension between religions. I understand that. What confuses me is why the Israeli police are so hard on Jewish pilgrims who want to go there.”

Johnson reflected on the concept of ascension. “The word ascend means to go up and the place where that is supposed to happen is the Temple Mount. So why is it not allowed?”

“The bible tells us that the Temple Mount will be a ‘house of prayer for all people’ (Isaiah 56:6).

However, the message that one receives from visiting the holy mountain is confusing, and the problem is bigger than just a few people being pushed aside. Something needs to be done about this obviously with a lot of respect, but there needs to be something done.“

Johnson has begun putting his own words into action and created The Freedom to Pray on The Temple Mount Campaign. The campaign is designed to help raise funds and awareness in order to arrive at a solution to the problem of Jews and Christians being banned from praying on the Temple Mount.

“We committed to raise $5,000 and other leaders are being made aware of this and asking what can they can do and how they can get involved,” Johnson explained of his new campaign. “I answer them and tell them to come to Israel and go up on the Temple Mount in order that one day we will all have the freedom to go up and be able to pray in peace.”

Johnson continued and said: “I call on religious leaders of all faiths to do something, to change the situation so that  there is freedom to pray on the Temple Mount for everyone.”

Visiting the Temple Mount is a less than hospitable experience. Currently, it often involves waiting in extremely long lines as only one of the 11 gates is open to Jews or Christian visitors. People end up waiting hours to have the experience of ascending the mount only to be ushered off quickly after their arrival. Visitors also have to put up with wailing women whose intent is to harass or even verbally abuse them while trying to sour their spiritual experience. Often visitors are screamed at, harassed and even have rocks thrown at them.

“Overall, it was a sweet and sour experience – going to the holiest place on earth but not being able to express what is going on in your heart, leaves one with mixed feelings.”

Johnson did express his gratitude to Israel for the experience. “I wish to express thanks to Israel for allowing people to go up at all and experience the mountain. There were times when no one was allowed up on the mountain whatsoever. The Temple Mount of the God of Abraham, who is father to all religions, should be able to be visited in peace while the children of Abraham should be able to live in peace with each other and use the mountain as a place where we can all concentrate our prayers for peace.”

For his part, the director of Liba, Yehuda Glick, decried the violence and the situation that happened with the Pastor at the emergency conference. “In light of recent events, we came to say loud and clear — enough!” he said in his opening statements. “The situation of daily attacks on Jews on the Temple Mount cannot continue for another moment. I call on the State of Israel and its leaders to act like a democratic state and protect the basic rights of every Jew who goes and prays on the Temple Mount.”