Creating Israel’s Future in the Present: Beginning A New Life this Independence Day 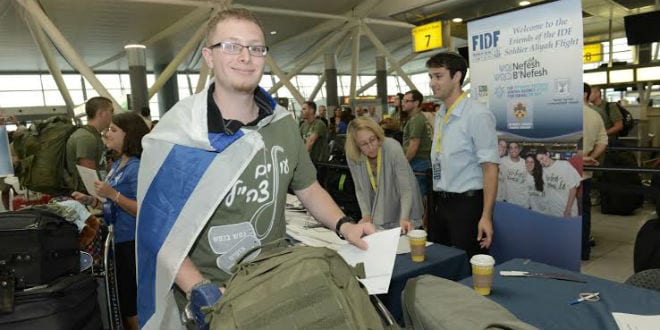 Through Nefesh B’Nefesh, in conjunction with Israel’s Ministry of Aliyah and Immigrant Absorption, The Jewish Agency for Israel, Keren Kayemeth L’Yisrael and JNF-USA, these 90 individuals have joined the ranks of thousands before them who have realized the dream of one day returning to the Holy Land.

Among the olim who became a citizen of Israel was London native Josh Steele, a finalist from Israel’s Master Chef T.V. cooking competition. He, and 59 other new Israeli citizens, made Aliyah [immigrating to Israel] as part of the Nefesh B’Nefesh Guided Aliyah program, which entitles them to all of the benefits that immigrants receive, while making Aliyah from within Israel.

At the same time, at the Tel Hashomer army base in the country’s central region, 104 lone soldiers – those who immigrate to Israel without family and enlist – began their tour of duty as part of the Friends of the IDF/ Nefesh B’Nefesh Lone Soldiers Program.

“The fulfillment of the Zionist aspirations of these 194 Olim while Israel gears up for its 66th Independence Day, highlights the integral role of Aliyah in strengthening the State of Israel,” said Rabbi Yehoshua Fass, founder and executive director of Nefesh B’Nefesh. “I can’t think of a better gift for the State of Israel on its 66th birthday than new Olim, and new IDF Soldiers, coming from over 20 countries around the world and casting their lot with us.”