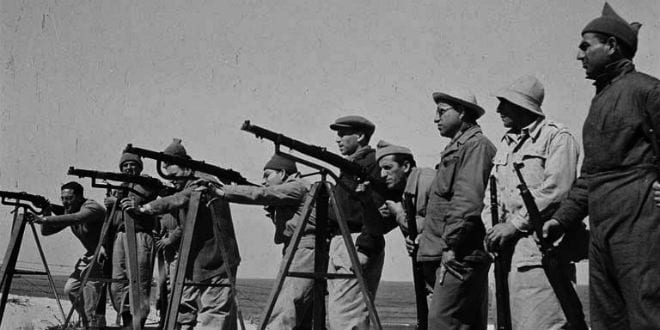 A special monument is located at the end of the trail that connects Israel’s Yad Vashem, the official memorial to Jewish victims of the Holocaust, and Mount Herzl, the national cemetery for Israeli leaders and fallen soldiers. Known as the “Memorial for the Last of Kin,” it commemorates the Holocaust survivors who fought and fell during Israel’s 1948 War of Independence.

These soldiers were lone Holocaust survivors – the last of their families – whose members had perished in Europe’s death camps. With no one left to continue their family’s legacy, these brave soldiers gave the ultimate sacrifice for the young Jewish state.

One such survivor, Shalom Tepper of Radom, Poland was deported to Auschwitz and Majdanek concentration camps but survived, escaping to join the Partisans in the Polish forest, where he fought against the Nazis until the end of the war.

Tepper joined Youth Aliyah and immigrated to Israel in 1946 according to a report on the IDF’s official blog. Two years later, he joined the Haganah at the outbreak of the War of Independence and served in Battalion 33 of the Alexander Brigade, which stopped the impending Jordanian and Iraqi armies and had a significant role in repelling the invading Egyptian army.

Tepper fell in battle with the Egyptians in the Gaza Strip, where 89 Haganah soldiers were also killed in the Fallujah Pocket around the town of al-Fallujah.

On Israel’s Memorial Day, Tepper is remembered among the 23,169 fallen soldiers that died defending Israel throughout the wars and battles in the Jewish state’s history.

Another Holocaust survivor who fought in the War of Independence and also from Radom, Poland, is Eliezer Ayalon. Ayalon’s story is different from Tepper’s as he went on to marry and raise a family in the Jewish state following his army service in 1948, where he fought defending Jerusalem. Born Lazar Hirschenfeis in 1928, Elizer survived five different concentration camps and was liberated following U.S. army unit.  His entire family perished in the Treblinka extermination camp.

In an interview on the Yad Vashem website six years ago, Ayalon recalls his past.

“I came here, a boy of seventeen, from a different planet, into a different planet. This is the country that that my father always said that every Jew had to come to and go to Jerusalem. The love of this country that was imbued within me by my parents from early childhood made me decide finally that I am going to Eretz Yisrael.
“The day that the State of Israel was established in May, 1948, I felt that I was coming back to normal life,” recalled Ayalon.

“So here I am right now, I have two married children, five grandchildren and one great-grandson. Three generations born and raised from the ashes of the Holocaust. Today I am the happiest man in the world.”