Their Son Murdered by Terrorists, One Family Creates Meaning Out of Suffering

Home » Their Son Murdered by Terrorists, One Family Creates Meaning Out of Suffering 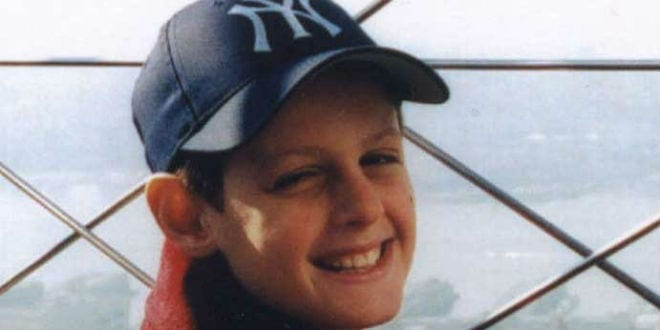 I feel sorry for the person who was killed but I feel sorrier for the people left behind.

-Koby Mandell , spoken to a classmate at the funeral of a father of six months before Koby himself was murdered.

The words of Koby Mandell ring forth this year and every year as Israel stops to remember its fallen soldiers and victims of terror on Yom Hazikaron, Israel’s Memorial Day. How do we deal with the tragedy of losing our loved ones? Our brothers, sisters, fathers, mothers, sons and daughters? Can we, as a nation, go on? Can we live on as individuals? Can we keep out the hate for those who ripped our loved ones from us and keep the hopes, the dreams, the ideals of those who perished alive?

If we look to the example of the family of the young boy who uttered the above phrase, then the answer we have from their actions, forming a role model for the rest of us, is a resounding yes!

Koby Mandell was murdered by Palestinian terrorists on 8 May, 2001, while he was hiking less than a mile from his own home in the Judean hills surrounding his town of Tekoa.

Tekoa, the birthplace of the prophet Amos, lies a few kilometers south-east of Jerusalem and the Palestinian run city of Bethlehem. Koby was hiking through a popular tunnel system interspersed with caves that begins in Jerusalem and connects down to the Dead Sea. Many of the caves date back to the Byzantine era and were used by monks as prayer alcoves.

According to a police investigation, Koby and his friend Yoseph Ishran hiked through the Tekoa wadi (dry river bed) and found themselves in one such small cave. There, they were suddenly ambushed by a group of Palestinian terrorists who proceeded to beat the boys to death using stones from the cave. The blood of the teenagers is still spread across the walls. The two children were the 62nd and 63rd people killed during the second intifada 13 years ago.

The Mandell family, who at the time were relatively new immigrants to Israel, had only been in Israel for five years and had been living in Tekoa for three. They immigrated from the United States where Seth was a Rabbi working for the Hillel foundation at the University of Pennsylvania and the University of Maryland. Sherri was a writer and teacher from Long Island, New York.

The Mandell’s, parents to three other younger children, knew that in order to go on, they needed to transform the cruelty of Koby’s death into acts of kindness and hope. For that reason, they created the Koby Mandell Foundation which provides healing programs for families struck by terrorism.

They believe that the Jewish response to suffering is to live a fuller and more engaged life. The mission of their foundation is “to create a Jewish response to the impact of terror and tragedy— helping bereaved mothers, fathers,widows, orphans and siblings re-build their lives, and create meaning out of suffering.” The foundation has dedicated itself to helping others who have suffered the trauma of loss and help them overcome the seemingly endless isolation that keeps them from returning to life.

The Koby Mandell Foundation offers family members of terror victims a wide array of programs to help find meaning in their loss so that families become stronger rather than weaker from their traumas. In this way, the Mandell’s are keeping Koby’s spirit alive.

Sherri also wrote a book entitled ‘The Blessing of a Broken Heart’, which was inspired by the stories friends and family told about Koby during the seven day mourning period following his burial and the rebuilding of their family which took place for the year after Koby’s tragic murder.

“During the seven day mourning period we told a lot of stories about Koby, and I felt that I had to tell his story,” Sherri told Breaking Israel News. “Later during that whole year we had a lot of spiritual experiences, specifically having to do with birds. They happened with birds, birds nests, and dreams about birds. I went into Jewish literary sources and looked at their meaning and the book is the result of those experiences. It tells my story and the story of my family during that first year after Koby was killed as well as the special stories about Koby all the way from when he was a baby and throughout his life.”

‘The Blessing of a Broken Heart’ is Sherri’s personal journey of trying to understand why certian events have happened throughout Jewish history. “The idea behind the book is to share inspiration on a personal level” said Sherri. The book passes the message on that people should choose hope and faith over despair and hate. Sherri’s message has resounded with audiences around the world to the point where her book was made into a one woman theater performance in Los Angeles.

The work of the Mandell family has helped fill a mighty void for those who lost loved ones in acts of terror.

“We saw that our children were suffering and there was no place for them to go for healing. They were in grief, they looked normal, they want to be normal, and be like everyone else, but inside they were dealing with emotions that they just couldn’t express” Seth explained.

“Children who are in grief don’t talk to their parents or to therapists because they have a desire to be considered normal. So we created a camp for children who are dealing with grief so that they could all be together and be accepted,” he continued.

The outlook of the Mandell’s and their dedicated staff differs from other methods of grief counselling.  “A lot of social workers try to distract children, but in our camp the children are made to feel safe and happy, but we also face the issues. We have a lot of creative therapy and art therapy aimed at helping the kids deal with the issues and getting what they need to get out into the open. The idea was to create a place where they can be who they are, because usually, they feel the need to hide who they are. That safe space is very beneficial for them,” Sherri explained.

When asked about how the family relates to Yom Hazikaron in Israel, Sherri responded by saying: “Yom Hazikaron is not necessarily for us, it’s more for other people to remember and recognize our loss. We remember every day, we don’t need a special day to remember, it is with us all the time. It’s a day for honouring all of the loss that happens in this country. The loss is ongoing. All of us in Israel have been in many battles just to survive. The day is a recognition that a lot of what has been built in this country comes from a lot of suffering, but the Jewish way is to rise up from the tragedy and celebrate, while recognizing the connection between the two.”

The strength that it takes a bereaved family to pick up the pieces from the life shattering tragedy of losing a child due to an act of terror is something which we can all look up to and take an example from. T

The creation of an organization which shines a bright light in this sometimes dark world, is astonishing. The lifesaving and life-altering work of the Koby Mandell foundation takes place year round and has affected thousands of people in Israel and abroad. May they be blessed with the strength to continue their good works for many years to come, and may all the bereaved families in Israel such as the Mandell’s find peace and solace.