Yom HaZikaron: Israeli Families Discuss What it Means to Lose a Soldier, a Son, a Sibling

Home » Yom HaZikaron: Israeli Families Discuss What it Means to Lose a Soldier, a Son, a Sibling 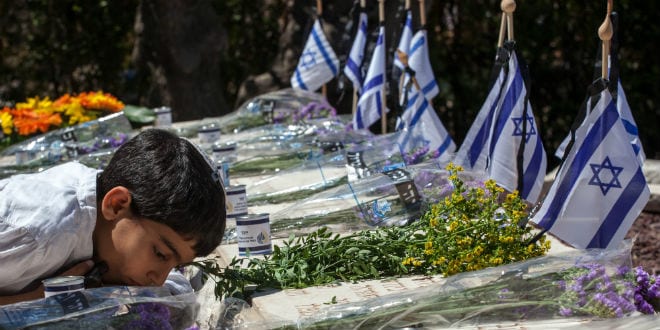 23,169 Israeli soldiers have died since the establishment of the Jewish state, including 84 soldiers between March 2013 and March 2014, according to the Israel Defense Forces.

“We in Israel are fighting—and dying—on behalf of every Jew in the world. … We are maintaining a safe haven for every Jew to escape to. Jews in the Diaspora live safer lives and hold their heads higher because Israel and its army exists,” said Chantal Belzberg, executive vice chairman of OneFamily, an organization dedicated to the rehabilitation of Israeli victims of terror attacks and their families.

On Yom HaZikaron, the fourth day of the Hebrew month of Iyar (sundown on May 4, 2014), Israelis will pay tribute to the country’s fallen soldiers in a solemn day of mourning. On its official Memorial Day, Israel also mourns the loss of civilians who were killed as a result of terrorism.

Among the soldiers killed during these past 12 months was 20-year-old Gavriel Kobi, a combat soldier in the Givati Brigade, who was shot and killed on Sept. 22, 2013 by a Palestinian sniper while on guard duty outside Hebron’s Cave of the Patriarchs. Also killed were 18-year-old Eden Atias, stabbed in the neck on Nov. 11, 2013 while on a bus in the northern Israeli city of Afula, and 31-year-old Shlomo Cohen, a Petty Officer 1st Class in the Israeli Navy, who was fatally shot by a Lebanese sniper while driving near the Israel-Lebanon border fence in an unarmored military vehicle. Cohen was on operational duty on Dec. 15, 2013 at the time of his death.

OneFamily’s Belzberg said that when a young soldier is killed, it has a “radically shocking, traumatic and debilitating” effect on the soldier’s parents and family.

“Siblings suffer tremendously, but not as deeply as a mother losing her son, the son she bore, nursed, dressed, walked to school, took to his school’s football practice and whose game she watched proudly,” Belzberg told JNS.org. “Siblings suffer because they don’t just lose a brother; they also lose their mom and dad. … They wallow in their grief and have no energy to care for the living. The dead child occupies a lot more time than a living one.”

Yehudit Rotenberg, whose son Sgt. Nadav Rotenberg, 20, was killed January 7, 2011 by a stray Israel Defense Forces mortar shell in an incident near the Gaza border, still remembers the day she learned of her son’s death. The family had seen a report on a border incident in which four soldiers were injured.

“It was a Friday night,” Rotenberg recalled. “We learned of the incident at around 6:10 p.m. I was worried, but I didn’t believe he could have died. They said there were injuries on the news. Eating Shabbat dinner was very stressful; it was hard to eat the food. … We kept thinking he would call, that he would tell us he was OK. … Then there was a knock at the door, and we saw an army uniform collar through the window.”

She said the hardship, the emotion, came quickly.

Avital Yahalomi has a similar story. Her brother, 20-year-old Cpl. Netanel Yahalomi, was killed on Sept. 21, 2012 while on patrol along the Israeli border with Egypt. Three heavily armed terrorists attempting to infiltrate Israel attacked the soldiers. One terrorist was wearing a suicide belt, which went off during the battle.

Cpl. Yahalomi was a deeply religious solider and a Zionist; three Jewish books were found on his body after his death. His sister, Avital, told JNS.org that her brother dreamed of being the strongest and best combat soldier. He was upset when he learned that because he wore glasses, which reduced his profile, he could not join the unit of his choice, but instead would be part of the Artillery Corps.

This knowledge, however, put his family more at ease. They knew he was on the Egyptian border, but they assumed that he was safe there.

“In general, we have peace with Egypt,” Avital said, noting that her brother was careful about what he told the family, never wanting to worry them.

On the afternoon of Cpl. Yahalomi’s death, his family was preparing for Shabbat at their home in Nof Ayalon, near Modi’in. When an IDF representative came to deliver the news, then 9-year-old Yitzchak opened the door.

“He didn’t know what was happening,” Avital said. “He thought they were coming to kick us out of our home and he called to mother. My father was in the shower. … One by one we learned what happened. Then we all just sat on the couch and we cried and cried. This is something that never goes away. It will never go away.”

“When you say goodbye to your son as he gets on the bus with all of the new soldiers, you’ve offered up your son as a potential sacrifice to the country,” explained Belzberg. “Your heart sinks. The worst may happen. But most parents say to themselves, ‘It won’t happen to me.’”

She added, “Then, in the middle of the night, there’s a knock at the door. … Three soldiers stare sadly into your eyes. Your worst nightmare has happened. Your son is dead. You scream and your whole body shakes. You collapse.”

But you have no choice except to go on. Today, Nadav Rotenberg’s younger brother is in his second year in the army. The first year, said Yehudit Rotenberg, “I worried a lot.” Yet she is also very proud.

“These are brave children,” said Rotenberg. “Even though I lost a child, I still believe the army is very important and we have to support it.”

Avital Yahalomi has similar ideas. “I am happy to be Israeli, even though it cost me so much. … I plan to stay here, to raise my children here, to send them to the army to defend my country,” she said.

“Yom HaZikaron is about remembering a larger family, about saying to each bereaved family that their child, the apple of their eye, is remembered,” said Rebecca Fuhrman, manager of marketing and communications for OneFamily. “Their loss is our loss.”

For a full listing of soldiers (in Hebrew) who died between last Yom HaZikaron and this one, click here. For a list of soldiers and victims of terror killed in 2013, click here.