Palestinian Unity Deal Will Have “No Authority” Over Hamas Forces

Home » Palestinian Unity Deal Will Have “No Authority” Over Hamas Forces 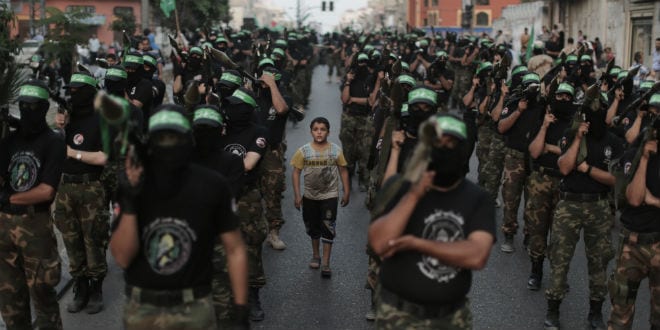 Despite claims that the new Hamas-Fatah unity government would make steps towards peace with Israel, a top Hamas official dismissed claims that the terrorist organization would never agree to recognize Israel.

In an interview with Egyptian newspaper Alyoum Sabaa, Mahmoud Al-Zahar further stated that Hamas forces would not be under the command of Palestinian Authority President Mahmoud Abbas.

Last week, Hamas and Fatah officials signed a reconciliation agreement that seeks to unify and consolidate Palestinian leadership into one unified government. The goal of the Palestinians is to form the national unity government within a five week deadline with general elections later in the year.

Zahar clarified that members of Hamas’s military wing, the Izz ad-Din al-Qassam Brigades, will continue to act independently of the new unity government as well as all armed factions belonging to Hamas.

Hamas announced plans to submit its own candidate for the upcoming Palestinian presidential elections. According to Hamas lawmaker Khalil Haya, Hamas has begun the necessary preparations to take part in elections for president of the Palestinian Authority.

Should Hamas propose its own candidate, this would be the first time that the organization has ever done so in elections for Palestinian leadership in the West Bank. Haya also explained that Hamas is attempting to restructure the makeup of the Palestinian Legislative Council and the Palestinian National Council to ensure the “true desires” of the Palestinian people are taken into account.

In response to the announcement, Israel cancelled all peace negotiations with the Palestinians. The US has warned the PA that it would cut all aid, in the form of $440 million, if the PA continues to negotiate with a terrorist organization.

Israel and the US are not the only ones unhappy with the new agreement. A Gaza-based jihadist group associated with al-Qaeda blasted the deal, calling it “a political crime against Muslims in Palestine.”

The Mujahideen Shura Council in the Environs of Jerusalem, responsible for numerous rocket attacks against Israel, published a statement on Wednesday calling Abbas a “traitor” and accusing Hamas of violating Islamic law.

“The ‘reconciliation’ was based on a number of serious violations of Sharia accepted by Hamas, which scandalously ignored widespread calls within its ranks to reject it,” the statement read.

“The most flagrant transgressions is accepting democracy and the ballot box as arbiter between the sides, vying for a portion of power, as well as affirming the presidency of the traitor Mahmoud Abbas and his right to determine the fate of Muslims in Palestine.”

The Mujahideen Shura Council accused Hamas of exploiting the deal as a PR stunt for the international world. “Despite all of this, Hamas leadership represented by Moussa Abu Marzouk described the speech as ‘positive’ and is moreover marketing the ‘reconciliation’ domestically and overseas as a great national achievement,” the council accused.

The council deemed Hamas leaders “illegitimate” and described their decisions as “hopeless…clearly breaking from the principles of the past.”

“The ‘apostate’ traitors of Fatah, as described by [slain Hamas leader] Nizar Rayan, are today national partners and colleagues. The question of recognizing Israel – once an unforgivable cime – is no longer shameful to advocate,” read the statement.