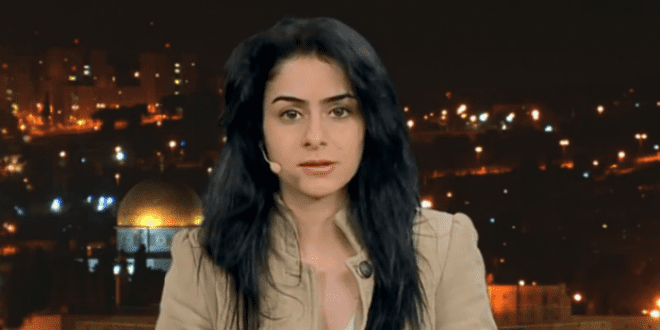 Christy Anastas, a young Palestinian Christian woman originally from Bethlehem, made waves recently when a videotaped speech she delivered in Sweden’s Uppsala University was posted on YouTube.

Now, her family is distancing itself from the position she has taken, hinting she may have been brainwashed by pro-Israel sponsors.  Her speech makes the grievous error of publicly condemning the Palestinian Authority for the suffering of Christians under their responsibility.

Anastas, 24, is now living in the United Kingdom.  She claims she was forced to flee due to threats against her person and her family for her stated views.  According to her family, she left home to study in Britain about a year and a half ago, but is no longer enrolled in the university there and her behavior has become “incomprehensible and unclear.”

The video, originally posted by the Jerusalem Institute for Justice, then removed and reposted by the Emmaus Group with a new introduction and ending, shows Anastas in the audience of an Al Jazeera interview with Palestinian negotiator Saeb Erekat.  Anastas asks Erekat if he is able to distance his emotions from the negotiations, and he answers that despite his personal pain, he is committed to the process because five years of painful negotiations are “cheaper” than five minutes of gunfire.  He then promises her, on television, that the Palestine he is negotiating for will be a peaceful country dedicated to freedom of speech and religion, democracy and human rights, especially for women.

The video goes on to show Anastas’s speech in Uppsala, where she questions  Erekat’s vision by demonstrating that the PA’s actions today, as well as those of Hamas, belie his promises.  She relates the story of her uncle who, upon refusing to pay “al-jizyah”, which Anastas describes as protection money charged against non-Muslims, was brought up on false allegations of treason, released, then shot to death in front of his own home.  At his funeral, another friend spoke up against his killers and was shot in the head.  His life was saved by Israelis, but he remained blind for the rest of his life.

Anastas brings statistics to show the threat posed by the PA against Christian Palestinians.  During the so-called “Israeli occupation” of Bethlehem, the Christian population there grew.  Following the two intifadas and PA control over the area, it dropped dramatically.

She defends the Jewish people’s right to a state.  “I believe God has given this land to the Jews as an everlasting covenant,” Anastas said.  “How many Muslim countries do we have in the world?” she asked. “Why can’t the Jews have one country?”

Anastas says she lost a close friend in the crossfire between Israel and Palestinians, but she blames Hamas and the PLO for the situation.  The two organizations, along with their state terror sponsors, offer financial incentives to the families of martyrs, creating a culture which encourages the fighting.  She understands why Israeli soldiers, who she points out are only 18 or 19 years old, respond violently to her neighbors’ provocations: she calls it an accident waiting to happen when teenagers are pitted against each other.

Her family says they are surprised by the video.  “For as long as we know, Christy’s position was always against the wall [Israel’s West Bank security barrier] and the Israeli occupation, which prevented her from living her childhood,” they said on Radio Mawwal, a local station.  Indeed, in a 2012 segment on 60 Minutes, Anastas and her mother appear, blaming Israel for the ills befalling their family.  At Uppsala, however, Anastas says “Israel doesn’t threaten us for sharing our views.  Palestinians do.”  So who is actually speaking under duress?