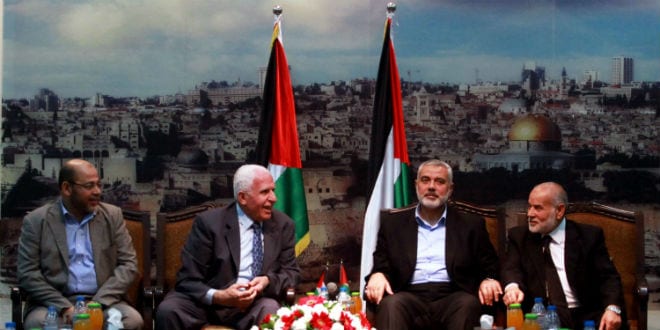 Israeli Prime Minister Benjamin Netanyahu canceled the latest round of peace talks between Israeli and Palestinian negotiators following an announcement that Hamas and the Palestinian Authority were forming a national unity government.

The agreement between the two Palestinian factions is meant to form a united Palestinian front against Israel. New elections will take place across Gaza and the West Bank and move members of the Hamas terror group into positions of power to negotiate with Israel.

Israeli officials slammed the agreement, saying that PA President Mahmoud Abbas was not interested in making peace with Israel. The Palestinians have maintained that the agreement is bringing them one step closer to a two-state solution.

The Palestinians stated that the new government would form within the next five weeks. Abbas is scheduled to issue a “presidential decree” announcing the dates for new elections, which officials believe will take place sometime over the next six months.

Wednesday evening, Netanyahu phoned U.S. Secretary of State John Kerry to condemn the move, which he said showed the “Palestinians were running away” from peace.

“Abbas has chosen Hamas and not peace. Whoever chooses Hamas does not want peace,” the prime minister said in a statement.

The United States expressed its support of Israel’s decision to cancel the planned session of peace talks.

“It’s hard to see how Israel can be expected to negotiate with a government that does not believe in its right to exist,” State Department spokeswoman Jen Psaki told reporters.

Psaki called on the Palestinians to commit “unambiguously” to standards of non-violence and must commit to principle recognizing Israel’s existence. She also described the news of the announcement as “disappointing in terms of the content as well as the timing.”

She said that the State Department believes that the new Hamas-Fatah resolution would “certainly complicate the process.” The U.S. has designated Hamas as a terror organization and the PA could potentially lose funding should Hamas join the PA government.

“The ball is in the Palestinians’ court to answer whether the principles that have been part of the process can be met,” Psaki stated. “Historically Hamas has not shown a willingness to abide by the basic principles expected by the U.S. government.”

Netanyahu is expected on Thursday to hold an emergency meeting of his high-level security cabinet and discuss how to respond to the Palestinian’s latest move.