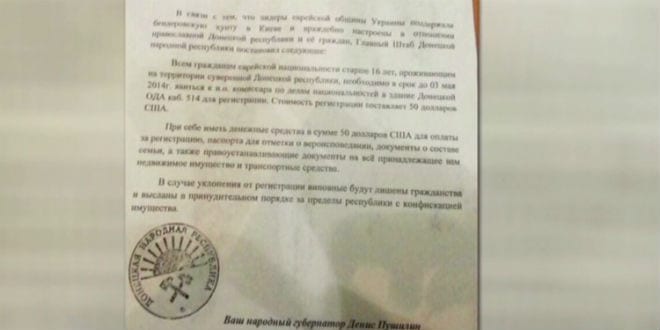 Ukrainian Prime Minister Arseniy Yatsenyuk has threatened to identify and punish “the bastards” responsible for a leaflet distributed over Passover demanding Jews register with the pro-Russian separatists now in control of several government buildings in eastern Ukraine.

“I made a clear statement and urged Ukrainian military and security forces and Ukrainian Department of Homeland Security urgently to find these bastards and to bring them to justice,” Yatsenyuk told NBC’s Meet the Press.

The fliers, which were handed out by men in camouflage and face masks outside a synagogue, require Jews to register themselves and their property, as well as paying a tax, or risk loss of citizenship and even deportation.  They were also distributed via social media.  The pamphlets were signed “Yours, the People’s Governor of Donetsk, Denis Pushilin.”  The men distributing them carried a Russian Federation flag.

On April 7 of this year, in the wake of Russia’s seizure of the Crimean Peninsula, separatists took control of government buildings in several cities in the Donetsk region.  Calling themselves The Donetsk People’s Republic, they are demanding either the federalization of Ukraine or union with Russia.  They are not recognized by any state.

Pushilin’s people denied any involvement in the creation or distribution of the fliers.  “Excuse me, but when we are struggling against discrimination by the Ukrainian government, how can we discriminate against the rights of other minorities?”  said Vitaly Ivanov, press attache for the Republic.

Most of Donetsk’s 15,000 acknowledge that the leaflets are a hoax, but that does not make them less worrisome.

“It’s just another illustration of nastiness that’s emerging here,” one woman told BBC’s Natalia Antelava. “I don’t think it means that Jews are in an immediate danger, but it’s all part of this plan to push people towards a confrontation.”

Regional chief rabbi Pinchas Vyshetsky decried the cynical use of the Jewish community for political purposes.  “It feels like someone is trying to drag us into a political game between Russia and Ukraine.”  He also said, “What I ask all the political leaders in Ukraine [is], leave us alone. We are not a political organization. We’re a religious community, and the people who come to the synagogue didn’t come to take part in a political meeting.”

The leaflets have drawn outrage around the globe.  Rabbi Alexander Dukhovny of Kiev, who leads the the country’s progressive Jewish congregations, said, “I received so many letters from the United States of America, from the U.K., from European countries, even from Australia.”

Political leaders, too, have stepped in to condemn the leaflets.  In Geneva, US Secretary of State John Kerry said, “This is not just intolerable, it’s grotesque. It is beyond unacceptable.”  Russian ambassador to the US Sergey Kislyak told Fox News, “I have no information on who has done it, but it is certainly an outrageous provocation.”

For now, nobody has taken responsibility for the flier, with each party — separatists, Ukrainians and Russians — blaming someone else for their distribution.  But coming as it has, some seventy years after the Holocaust, it is seen as chilling evidence that the once peaceful climate in which the Ukrainian Jewish community lived may quickly become dangerous.