Netanyahu to Abbas: “Let Us Know” When you want Peace

Home » Netanyahu to Abbas: “Let Us Know” When you want Peace 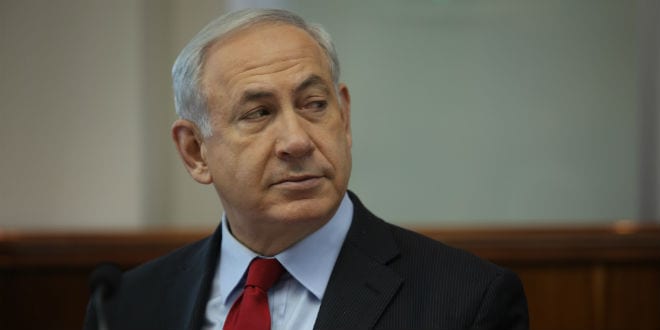 Israeli Prime Minister Benjamin Netanyahu criticized an announcement made by the Palestinian Authority that it was threatening to dissolve its government as well as reports that Abbas’s ruling Fatah party is forging an alliance with Hamas.

Speaking at a post-Passover Mimuna celebration in Or Akiva, the prime minister said, “Today, we saw the Palestinian Authority speak of dismantling itself and also taking about unity with Hamas. They should decide – either dissolve, or enter into a union with Hamas. When they want peace, they should let us know. Because we want a genuine peace.”

Palestinian officials have reported that PA President Mahmoud Abbas is threatening to dissolve his government and all PA security forces if peace talks with Israel fail. Dissolving the PA would be in protest to lack of progress in the US brokered peace negotiations.

With the April 29 deadline of the current round of peace talks fast approaching, the PA is increasing pressure on the US and Israel to give in to Palestinian demands.

Certain senior Fatah officials are denying claims that Abbas is debating the possibility of dissolving the PA. General Adnan Dmeiri, spokesman for the PA security establishment, called the news an “Israeli invention,” claiming that Israel was purposely trying to thwart peace talks.

Another PLO official, Qais Abu Laila, said that dismantling the PA is “unrealistic” and that it “would be suicidal.”

However, the Palestinian Ma’an new agency cited PA sources in high leadership positions as saying that the PA could be dissolved due to Israeli “intransigence.” According to the sources, the PLO’s Negotiating Department is planning ways to dissolve the PA and the consequences of such a move.

The US State Department said that such a move by the PA would be an “extreme step” and have “grave implications.”

Earlier this week, a senior Hamas official based in Egypt, met with PLO officials as part of reconciliation talks between the two groups. Azzam al-Ahmad, secretary general of the Palestinian People’s Party, said that he is optimistic that tensions between Hamas and Fatah will come to an end.

“We are going to Gaza not to propose new suggestions, but rather to carry out a clear mission which is to end the state of disagreement,” Al-Ahmad told Ma’an.

Israeli Transportation Minister Yisrael Katz said on Tuesday that the PA is no true peace partner.

“Now it appears that Abbas is bluffing. He is not willing to make concessions, he turned to the UN and he ran to hug Hamas instead,” Katz wrote on his Facebook page.

Katz added that “negotiations are essentially over” and that it was time for Israel to unite. He said that “If the PA does dissolve, the immunity granted to top PLO officials under the Oslo Accords will be cancelled, and every contact MK Ahmed Tibi has with Abbas will be thought of as contact with an enemy.”

“We have a great country, we are righteous and we will win,” Katz stated.