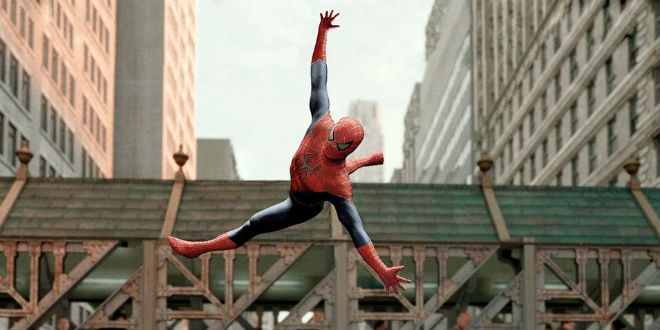 Andrew Garfield, the newest actor to play Spider-Man in the movie series, told TimeOut Magazine in an interview that he believes the character to be Jewish. “He lives in Queens, he’s neurotic and he lives with his aunt. Of course Spider-Man is Jewish.” Garfield, 30, grew up in Surrey, and is convinced the Marvel super-hero – like him – has Jewish roots.

Ironically, the producers of Garfield’s film The Amazing Spider-Man 2, which opened last week worldwide, angered the Hasidic population of the New York neighborhood of Williamsburg last year, when they shut down streets to film during the Jewish holiday of Passover.

Garfield told Time Out, “Peter Parker is not a simple dude. He can’t just switch off. He never feels like he’s doing enough. And Peter suffers from self-doubt. He ums and ahs about his future because he’s neurotic. He’s Jewish. It’s a defining feature. He’s an over-thinker. It would be much easier if he was a life-saving robot.”

Garfield hopes that Jewish people won’t mind the cliche. He says that since his father is Jewish he certainly knows what the mindset is.

Rabbis in New York have claimed for years that Spidey was part of ‘the tribe’. Indeed, the character was created in 1962 by Stan Lee, a Jewish-American as well as other legendary Jewish writers like Brian Michael Bendis and Peter David. Together they threw in a whole lot of Yiddishe Schtick to liven up the action throughout the comic books and movies of Spider-Man.

Garfield compared the comic hero to the biblical figure of David. In the Book of Samuel, King Saul sends soldiers to kill David, who finds a cave and has a spider weave a giant web to hide him from the soldiers.

Lee wrote:  “To me you can wrap all of Judaism up in one sentence, and that is ‘Do not do unto others…’ All I tried to do in my stories was show that there’s some innate goodness in the human condition. And there’s always going to be evil; we should always be fighting evil.”

On paper at least, Peter Parker, the teenage science whiz turned superhero and principal character in the Marvel Universe, is a non-specific American Protestant of vague Anglo descent. Anyone who has an ear for these things, however, can tell you that Spidey’s as Jewish as Tevye.

One could argue that Spider-Man, a representative of the second generation of comics (known as the Silver Age), embodies the first generation of post-war Jewish-Americans. His parents are simply gone (symbolically, in a wiped-out Europe?) in contrast to the classic “Is He Jewish?” character from the earlier Golden Age, Superman, who himself had to actively leave his homeworld behind as it self-destructed.

More important, perhaps, is the evidence right there on the page. Peter Parker doesn’t just sling webs, he slings zing. The Parker Patter, as written by Stan Lee and the others, is extremely reminiscent of Yiddishe witt of the post war era.